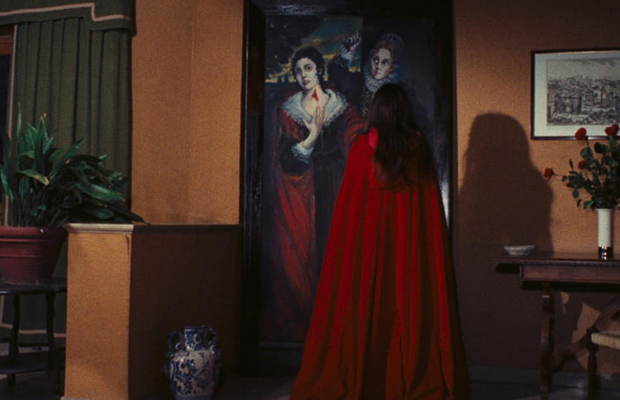 In the grand history of giallo cinema, one of the more minor figures who breezed in and out during the genre craze was Emilio Miraglia, a director responsible for two heralded but relatively unknown examples thanks to an unceremonious early retirement. A lapse in ownership rights resulted in widespread distribution of subpar prints for his 1971 film The Night Evelyn Came Out of the Grave, which did little to improve the legitimacy of his talents as a filmmaker. But Miraglia’s immediate follow up was the equally sensational The Red Queen Kills Seven Times a year later, with some returning cast members in yet another narrative using a supernatural element as a red herring.

In The Night Evelyn Came Out of the Grave, psychotic aristocrat Alan Cunningham (Anthony Steffen) is haunted by the death of his titular wife, a beautiful redhead who cheated on him. Now, he finds himself stalking other beautifully buxom gingers and leading them into sadomasochistic rituals ending in murder at his castle, where Evelyn’s brother Albert (Roberto Maldera) observes from the eaves. After a séance where Alan attempts to contact Evelyn backfires, his cousin, and closest heir Farley (Umberto Raho) offers to move in, and convinces him to marry another woman who looks like Evelyn to alleviate his psychosis. After murdering stripper Susan (Erika Blanc), Alan becomes enamored with Gladys (Marina Malfatti) and they marry. However, Gladys is haunted by strangeness in their home, including at the hands of Albert and Alan’s incapacitated Aunt Agatha (Joan C. Davis). When they’re both killed under mysterious circumstances and Alan has a mental breakdown after seeing what he believes to be Evelyn’s phantom, he’s carted off to a mental institution, revealing some ulterior motives from his new wife.

The plot for The Red Queen Kills Seven Times perfectly exemplifies the glorious convoluted bent of the traditional giallo. Initially, the narrative couldn’t be easier to follow, as two sisters, Kitty (Barbara Bouchet) and Franzsika (Marina Malfatti) are introduced as children and aligned as the inheritors of not just grandpa’s (Rudolf Schundler) castle but a cursed legacy wherein a female descendant of the family will be visited by the bloodthirsty Red Queen who returns every 100 years to wreak murderous havoc and claim seven fresh victims. When grandpa dies, a rash of killings occur within the sisters’ social circle, and witnesses eye a perpetrator wearing a red cape and uttering a chilling peal of laughter during each kill. And she looks just like Evelyn, a mysterious niece who apparently left for America, but Kitty and Franziska know otherwise. Soon, bodies begin piling up around the sisters, including Sybil Danning as luscious Lulu Palm.

Miraglia would only go on to have six credits to his name as a director following his contributions to a string of lesser B-genre efforts throughout the better half of the 1960s as an assistant director. Making his debut in 1967 under the pseudonym Hal Brady with Assassination, starring Henry Silva, he’d reunite with his star for another crime thriller and then the little known Klaus Kinski starrer The Vatican Affair (1968). His two gialli attempts would receive wider renown perhaps because of their odd mixture of contemporary pulp mixed with classic thriller techniques. For instance, the series of reveals at the end of each title owes acknowledgement to something like Clouzet’s classic Diabolique, where devious lovers conspire to catalyze madness in order to snag an inheritance. Miraglia takes each of his scenarios a bit further by compounding his double crossings.

Of the two, Evelyn is perhaps the more pleasurable thanks to Bruno Nicolai’s oddly cheery score (even more expressive in Red Queen), which would seem to indicate the film is more of a romantic melodrama than about a crazed psychopath slaughtering red headed women, his memory constantly flooded by his dead wife’s hedonistic bout of adultery in their garden. Anthony Steffen, referred to as the Italian Clint Eastwood, is quite entertaining as a character segueing into a surprise sympathetic victim of the narrative. Marina Malfatti, who reteamed with Miraglia on Red Queen (and is arguably outshined by Barbara Bouchet in that venture), is essentially the female lead here, though marketing materials in the decades since the film’s release tend to feature bombshell Erika Blanc instead.

Like their earlier Black Cats collection, a double feature release featuring titles by Lucio Fulci and Sergio Martino, Arrow Video proves to have cornered the market in significant restorations of notable genre titles and Killer Dames is a marvel for giallo fans. Previously, Miraglia’s famed titles were restored in 2006 by NoShame in the Emilio Miraglia Killer Queen Box Set, but Arrow’s new set trumps the out-of-print set with these new 2k restorations from the original camera negative. As usual, inspired bonus features accompany each specific title, with audio commentary from Troy Howarth and an introduction to Evelyn courtesy of Erika Blanc on Evelyn. Alan Jones and Kim Newman provide commentary on Red Queen.

The Night Erika Came out of the Grave:
Erika Blanc gives this nine minute interview in 2015 regarding Miraglia’s film, who explains the dance number included in the film was choreographed by herself.

Life of Lulu:
Sybil Danning discusses her role in Red Queen in this interview from twenty minute interview from 2016, describing her character as a hooker with a heart of gold (and points out the nudity is provided in the film only from herself and Barbara Bouchet, not the Italian actresses). Danning discusses additional elements of her life and career.

Archival Special Features:
Several archival features are included on the disc. Dead a Porter is a thirteen minute segment featuring production designer Lorenzo Baraldi, Round Up the Usual Suspects is an eighteen minute interview with actor Marino Mase, while If I Met Emilio Miraglia Today…is a four minute archival feature with Blanc, Baraldi and Mase. Lastly, in My Favorite…Films, actress Barbara Bouchet is on hand in a minute long segment.