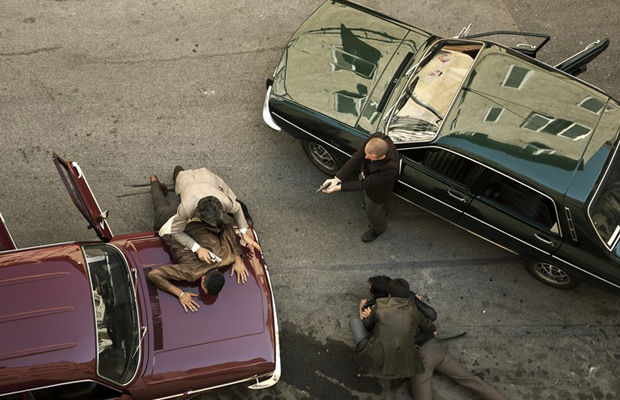 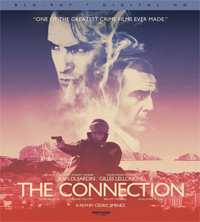 Cedric Jimenez‘s The Connection is a handling of a scenario touched upon from an American perspective in William Friedkin’s classic 1971 film The French Connection. A nicely mounted production peppered with several visually arresting moments and fine attention to period detail doesn’t have the same powerful draw as the earlier title. Unfortunately, Jimenez’s film often feels a bit too derivative by today’s standards of true crime epics. A great cast, headlined by Jean Dujardin and Gille Lelouche are reason enough to give the title a look, while it’s mid-July theatrical release (following mostly positive reviews out of the premiere at the 2014 Toronto International Film Festival) yielded mild box office.

The Connection (aka La French) may not appear to be anything special. And the truth of the matter is, it really isn’t, except for the fact that it’s loosely related to the long spanning series of drug related operations referred to as ‘the French Connection,’ which, of course, inspired William Friedkin’s iconic 1971 film (which won Best Picture and spawned a John Frankenheimer directed sequel). Sporting an impressive production value and a handsome cast, Jimenez definitely gets the look and feel right, as far as our expectations are calibrated for how these things go. And yet, there’s something innately underwhelming about all this, and though Jimenez is, arguably, presenting us with a ‘fresh’ perspective, it doesn’t manage to provide any enlightenment.

It’s 1975, and Pierre Michel (Dujardin), a magistrate heading up the Juvenile division is reassigned to overseeing organized crime thanks to his prowess. With exceptional zeal, Michel tackles the considerable trafficking that’s been plaguing Marseilles, and we’re soon told that it’s his name on the tips of everyone’s tongues. Having grown close to a few youths, one in particular that overdoses on heroin, Michel takes his mission personally, aiming to topple the head of the organization, run by kingpin Tany Zampa (Gilles Lelouche). At first, Michel proves to be quite successful in his pursuits, but eventually hits an invisible wall when he discovers that internal corruption is causing a standstill. Meanwhile, Zampa begins to feel the heat, and Michel’s pursuit causes unrest in his faction, leading other criminals to encroach on his territory, such as Crazy Horse (Benoit Magimel), which leads to violence. Distracted by issues at home when his wife (Celine Sallette) decides to leave him due to his obsession with work, Michel is eventually taken off the case when he openly challenges the crooked mayor. But several years later, in 1981, the mayor is made to be minister of the interior by new president Francois Mitterand, and suddenly, Michel has the opportunity to take down his foe.

Jimenez has snagged comparison to earlier works of Scorsese, but the likeness is superficial. If anything, The Connection somewhat recalls Guillaume Canet’s 2013 drug fueled NYC period piece, Blood Ties in that both films have considerable potential yet sometimes underwhelm. Of those two, Jimenez’s is superior, but he seems incredibly gun-shy in representation of the feminine (unlike Scorsese). We get moments with the wives of these opposing forces, with Celine Sallette outshining the mob moll played by Melanie Doutey, yet it’s an incredibly thankless role, especially for an accomplished actress like Sallette. For a majority of the running time, Lelouche is a stone-faced pit-bull, betraying an emotional capability very seldomly until the film’s last segment. He opens a nightclub, ironically titled Krypton, for his wife, which lends the film a groovy disco infected vibe.

There’s an empty decadence to the Zampas, but we learn very little about them beyond their fancy, acquired tastes. “I’m craving sea urchin,” yawns Zampa’s wife. But the winning attribute here is a very likeable Dujardin, dressed up in smart vintage suits and a pair of killer sideburns. It’s too bad that the rest of the film lacks this suaveness, as the screenplay sometimes seems borderline ridiculous, especially in the initial set up where people are saying things like “their smack is deadly hell.” Guillaume Roussel’s energetic score is certainly worth nothing, while Jiminez also works Sheila’s cover of Sonny Bono’s “Bang-Bang” into the mix (though perhaps not as effectively as Francois Ozon’s short “A Summer Dress”).

Drafthouse presents the title in 2.35:1 and DoP Laurent Tangy, often on second unit or assistant duties on a variety of Besson’s action films, does his most notable work to date here with Jimenez. The transfer looks great, though the extended running time tends to feel even longer outside the immersion of the theater. Several extra features are included for viewing pleasure.

The Making of The Connection:
A fifty minute behind-the-scenes featurette finds Jimenez being interviewed on his career and the making of the film, as well as cast and crew interviews interspersed with footage from the set.

Lovers of period crime capers and fans of the original Friedkin film should definitely take note. But those new to the considerable history behind the making of the film may feel a bit distanced by Jimenez’s approach.