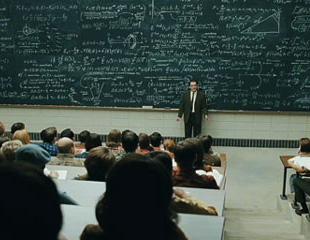 Have Joel and Ethan Coen followed up No Country for Old Men with another Oscar winner? A clear favorite (I’ve got my hand up) among the film critics and bloggers polled by IndieWIRE, A Serious Man might have a big and bright future ahead of it and as Eugene points out, “the Coens latest took top honors as Toronto’s best narrative film, finding a place on nearly every single ballot.

Other category winners include: Erik Gandini’s Videocracy as best doc, Colin Firth’s work in A Single Man as best lead performance, Mo’Nique and Up In The Air‘s Anna Kendrick for best supporting performance and Karyn Kusama’s Jennifer’s Body was deemed the crap title of the festival.

The 2nd place finisher in Best Narrative film was Lu Chuan’s City of Life and Death which I had originally pegged to see, but impromptu shuffling around of the schedule meant I choose Luca Guadagnino’s I Am Love in its place. The Tilda Swinton starrer is a definite throwback to another era of filmmaking and this film was tied with three other films that I managed to see at the fest as well:
Bruno Dumont’s Hadewijch, Tom Ford’s A Single Man and the brilliant Samuel Maoz tanker anti-war film Lebanon. Among the top vote-getters in the docs we find the Chris Smith’s Collapse and Don Argott ‘s The Art of the Steal (look for my reviews of those shortly).

Toronto 09′ became synonymous with three stellar acting performances: Colin Firth’s take on depression in A Single Man, Tilda Swinton’s mid-life crisis in I Am Love and Michael Stuhlbarg’s idea of not knowing which way is up in A Serious Man. I’m glad to see that Cannes perfs from Tahar Rahim (who I interviewed and who’ll be at work on several projects) and Katie Jarvis from Fish Tank were not forgotten and Quebec actress Anne Dorval received her due and was acknowledged by the poll for her role as the single mother raising a difficult son in Xavier Dolan’s I Killed My Mother. Best Supporting nods continue for Mo’Nique for Precious – he is my pick for Best Supporting Actress this year, and she was tied by Anna Kendrick’s bit in Up In The Air. Richard Kind, Fred Melamed, Sari Lennick, Aaron Wolff and Benjy Portnoe were also recognized for their efforts, look for them to grab Best Ensemble awards later in the year. See the complete point totals below. Click here for the article/survey participants (including yours truly!)

BEST DOCUMENTARY:
1. Videocracy, directed by Erik Gandini (24)
2. Collapse, directed by Chris Smith   (17)
3. The Art of the Steal, directed by Don Argott (16)
4. The Topp Twins: Untouchable Girls, directed by Leanne Pooley (10)
5. How To Hold a Flag, directed by Petra Epperlein and Michael Tucker (9)

** Richard Kind, Fred Melamed, Sari Lennick, Aaron Wolff and Benjy Portnoe received a combined total of 11, though individually no one got more than 3.