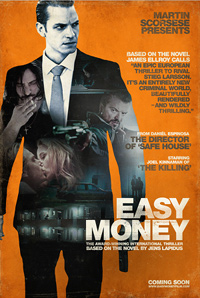 Lighting up the festival circuit in 2010, Daniel Espinosa’s Easy Money finally lands stateside this summer, premiering after his 2012 English language debut, Safe House. Based on the first of a series of crime novels by Jens Lapidus, this Sweden set amoral tale of elitism, drugs, and power lust, may be one of the best thrillers centered on organized crime in years.

Three parallel storylines kick off with the daring prison escape of Jorge (Matias Varela), curiously breaking out with only a year left of his sentence, turning to but turned away from his sister, who’s several months pregnant. Then there’s Mrado (Dragomir Mrsic), a Serbian gangster, suddenly embroiled in his own paternal issues when his ex-wife disappears and leaves him with his young daughter, now assigned to track down the escaped Jorge, who happens to have information about drugs being shipped in from Germany. And then there’s our main protagonist, JW (Joel Kinnaman), a brilliant wunderkind at his university, painstakingly trying to break into a circle of wealthy friends. Between writing term papers for classmates, he falls into a crime syndicate as a driver, and upon saving Jorge from near death at the hands of Mrado, concocts a plan to buy a struggling bank in order to funnel and store drug money. However, the Serbians wants their cut of the goods, and when Jorge’s crew refuses to give it, a drug war is on the horizon. JW quickly learns that you’re only as good as the moment you’re needed or necessary, and as each of their three separate plot lines inextricably converge, alliances are made that will determine the fate for all of them.

For a thriller with a running time of just over two hours, Easy Money runs at an extremely fast pace, expertly crafting three very separate but distinct characters and storylines that ease together snugly before you even realize it. Separately, each of their character tics are overly familiar, though with some slick editing and gritty atmospherics, Espinosa crafts some wonderfully tense sequences from conventional tropes. Certainly, an accomplished screenplay and notable performances enhance the proceedings, particularly Dragomir Mrsic as a surprisingly expressive gangster. Espinosa cast JW wisely with Joel Kinnaman, soon to be a major star in the US as the new RoboCop, and also having appeared in Espinosa’s follow-up, as well as the Dragon Tattoo remake, Lola Versus and the popular television series, “The Killing.” Here, Kinnaman is faultless as a power hungry upstart, failing miserably to attain more indefinite acquisitions, like love. Thankfully, Kinnaman has reprised his role in the Swedish made sequel, Easy Money II, though Espinosa doesn’t return as director. While it’s too early to tell if Espinosa will be another foreign talent to be victimized by Hollywood bureaucracy, with films like Easy Money it’s plainly evident that he’s a talented director, and anyone can see the evidence of mass appeal in this intelligent crime thriller.