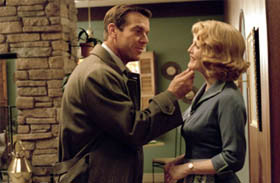 This yearâ€™s substitute for the Lasse HallstrÃ¶m Oscar film award comes from director Todd Haynesâ€™ social drama, which sees the director reunite with his Safe star Julianne Moore who plays the strong female lead of a woman who suffers personal devastation and must decide to take a stance to tolerate indifference from within her socialite circle. Showcasing Moore in perfect form; she convincingly plays a woman with the artificial emotions of that time and comes off looking brilliant in this period piece which a wonderfully well composed picture. Haynes uses textured colors, costumes, attitudes, and dialogue to bring up a true feeling of that time. Douglas Sirk fans will find a perfect contemporary film.

The 50â€™s were a glorious time for upper middle class families of America – while the negro servants were tending to removing spots and stains from the kitchen floor, father was bringing home the dough, mother baked the cookies and played dress-up, while the children were learning their ABCâ€™s at school. Like the cover for any â€œgood livingâ€ magazine of the time; this perfect family tucked away in the glossier parts of Hartford has one deep, dark secret. The Whitakers family unit receives a shock when the ignorantly innocent wife-Cathy Whitaker (Julianne Moore) finds out that her husband-Frank (Dennis Quaid) is a closet homosexual. The friendly giant-the local gardener (Dennis Haysbert) who takes care of the green stuff outside their immaculate home lends his support,- a relationship ensues which knowingly causes an uproar in the both the black and gossip-friendly white communities. Like the changing of the seasons – some of the attitudes are transformed as well.

Haynes creates a true â€œfeelâ€ of the period – from the opening screen title-card to deliberate use of footage rolling in the background of the car to the kid repeating the words â€œsure popâ€ one too many times. The props and set-design are neat, but Haynes is so concentrated on getting the sense of the era and the Sirk-tone that he ultimately forgets the majority of his audience who will be unaware of the homage – an audience that have become drearily used to films about racial equality, gender fairness and the right for sexual-preferences. Haynes seemingly grazes the surface of these issues, but not once does he ever dig deep enough into the personas of these characters. Where the film is at fault is that we never get to see Mooreâ€™s shattered ego in her new light of reality, we get a glimpse of how it was for her husband to make such a bold move and for the black man – who doesnâ€™t say much once he embarks on the train. I didnâ€™t find Far From Heaven a difficult watch but beyond the nice looking stylized film and some great performances – this unmoving, sluggishly long melodrama is perhaps a little too contrived for movie audiences of this era.