Those Who Love Me Can Catch the Train Wreck: Thompson’s Latest Flat, Overstuffed 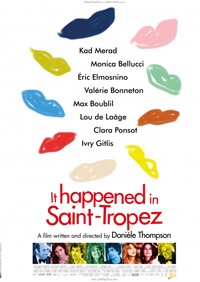 Familial relationships and transportation, two favorite themes of writer/director Daniele Thompson, figure heavily in her latest feature, It Happened in Saint Tropez, a breezy situational comedy that suffers from a hokey forced charm, beginning with its misleading English title translation (the original title, Des gens qui s’embrassent should be something along the lines of People Who Embrace). A cousin in tone to something like Anne Fontaine’s 2009 bauble headed The Girl From Monaco, it unfortunately fails to match the effervescent enchantment of some of Thompson’s past titles, like her lovely 2006 film, Avenue Montaigne.

Noga (Lou de Laage) is a young cellist living in New York with her intense musician parents, Irene (Valerie Bonneton) and Zef (Eric Elmosnino). Familial drama rears its head in their isolated universe by the upcoming wedding of Zef’s niece Melita (Clara Ponsot) back in France. Irene and Zef are at odds with his brother Roni (Kad Merad) and his family, mostly due to their disdain for Roni’s rather dumb but pretty Italian wife Giovanna (Monica Bellucci), which is awkward for Noga and Melita, who feel as close as sisters. Zef’s choice to resume practicing the family’s lapsed Judaism at the beckoning of Irene has also placed him at odds with his family. But as Irene and Zef resolve to avoid the wedding, Irene suddenly is killed in a fatal car crash, which means her body will be shipped back home to be buried on the same weekend as Melita’s wedding.

As the distraught Noga makes her way by train, she meets a handsome stranger named Sam (Max Boubil), with whom she immediately seems to fall in love with. Sharing an intimate moment on the train, she assumes they will part forever, only to see him pop up again as her cousin’s groom on the wedding day. Time passes, but events only seem to keep bringing Noga and Sam continually into each other’s orbits.

Thompson obviously has a considerable attraction and a knack for writing complicated scenarios featuring a variety of characters. Even though they’re a largely uninteresting group this time around, they are, at least, distinct. If the setup feels familiar, it’s interesting to note that Thompson (herself the daughter of director Gerard Oury) began as a writer, collaborating on projects with her father as well as some high profile titles from Patrice Chereau, which explains why you might recall Those Who Love Me Can Take the Train (1998) when watching her latest film.

The train, the airport, a bar, all locations where characters come together to interact, whether strange or familiar, seem to be the starting points for Thompson’s magic. If only Saint Tropez hadn’t been trying so damn hard! The screenplay, once again co-written by Thompson and her son Christopher, features an alarming amount of contrived, convenient scenarios that will satisfy every obvious prediction along the way (with the exception of surprisingly not throwing in a misplaced corpse when they have the opportunity).

Perhaps what made Avenue Montaigne so vibrantly alive was that charming lead performance from Cecile De France. Thompson casts an ingénue, Lou de Laage in the lead role, and while she’s certainly beautiful and not without talent, she lacks the requisite screen presence to navigate through the clichéd re-hashed scenarios of the overworked screenplay. And there’s a strange imbalance among the cast members, as Thompson unwisely casts famed French violinist Ivry Gitlis as the amnesiac papa of Zef and Roni, his disease a convenience, his scene stealing awkwardly cornball, aimed at crowd pleasing and a distraction from the mediocre proceedings (as is the broadly used conflict of Zef’s commitment to his religion as an Orthodox Jew, with his strictly observed diet causing the greatest upset they may as well have modernized the conflict and made him vegan).

On the other end of the spectrum, Thompson (and she’s not the first director to do this) completely wastes the breathtaking Monica Bellucci in the role of a vapid, dumb-dumb trophy wife that could have been much better utilized. And let’s not even get started on the silly twinning of Valerie Bonneton. Unfortunately, for featuring some rather breathtaking locales, the film also looks rather flat and uninspired, especially in that magical, titular region, of which only a small portion of the film is set. What the hell happens in Saint Tropez? Nothing, actually. Strangely, it’s a transitional scene of little importance to the big picture. For some risqué familial sexual dynamics, a rewatch of Cousin Cousine (1975) seems more justifiable.

Reviewed on April 15 at the 2013 COLCOA Film Festival.