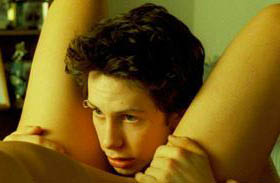 Something is terribly wrong when people turn to Jerry Springer to learn about people should resolve their conflicts and even more frightening is when a four year-old passes her time playing with her dolls and watching women in clad bikini suits in front of a television set twice her size. What are the moms and dads of Suburbia America up to? Perhaps more than one person would benefit from the European school system-which keeps the kids in school and away from casual mÃ©nage a trios and gang bang orgies and also prevents malicious adults from psychologically and mentally abusing them. Do you know where your children are? Filmmaker Larry Clark apparently does and his newest film gives us another pornographically jarring portrait of how messed up society has become in the big old USA. Ken Park explores Clarkâ€™s continual fascination for the youth subculture, but the emphasis is placed on the fact that the kids are perhaps not the only ones to blame for the mess.

Clark is no stranger to controversy-his directorial debut gave us teenage sex, drug use and a boy who picks up girls and passes out his HIV virus, this film doesnâ€™t steer far from this. As in his previous films such as Kids (1995) and Bully (2001),-youth alienation and its subcultures dominate the filmâ€™s backdrop, but this time around Clark also points a narrative finger at world of adults. The integral make-up part of a Clark film is the â€˜lookâ€™ of youth-as he has done in the past he chooses to go with a bunch of non-actors from nearby skate-parks and 7/11â€™s to play the central characters. The â€œlook-the-partâ€ aspect and the â€œspeak-the-languageâ€ lingo are two criteriaâ€™s that are met from casting the roles in such a manner. The narrative involves a California white-trash suburb with four separate families and a boy that blows his head open by the aid of a handgun. The narrative doesnâ€™t bother presenting the healthier image of family (that is left to Disney), but rather a nuke-bomb portrayal of indecent family values such as â€œhow to eat out your mother-in-lawâ€ sequence or how to seriously disturb your daughter who is supposed to be in the image of the Virgin Mary.

Other than offering some intimate queasy sequences and some ugly characters bring a barf bag for the fiery scrabble competitor grandson whose sexual deviance is left totally uncensored for the viewer. Apart from the bizarre and ugly truths that exist, there really isnâ€™t much here in terms of story or viewer interest. This might just be the time for Clark to investigate the thought of taking his career into another direction-he seems to be upping the ante with how much more shocking can I get attitude which is more about getting hardcore than actually saying something that matters. Ken Park doesnâ€™t say much as a film and it doesnâ€™t say much about Clark as an artist or storyteller.