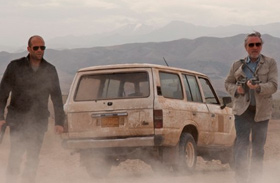 If ever there were a moment to snort at the conspiratorial challenge posed by the words â€œbased on a true story,â€ that pop up defiantly during title sequences on many a film, it would be at the introduction of Killer Elite, the feature debut of director Gary McKendry. Additionally, the filmâ€™s poster sets up an even more telling dichotomy, splashing the tagline â€œMay the Best Man Liveâ€ over the three box office draws, while also informing us again about its merit boldly beneath the title, â€œbased on a true story.â€ Obviously, this true story concerning sparring British Special Agents isnâ€™t going to be presented in a forum of understanding, empathy, or compassion; this is blood sport, a gladiatorial spectacle. Peckinpah fans rejoice, as this is not a remake of the 1975 James Caan starrer.

Sidenote: Do you ever wonder what is meant by true story? Shouldnâ€™t this bastardized phrase be more along the lines of â€˜based on a true account,â€™ etc? This film is based on a 1994 book, â€œThe Feather Menâ€ by Sir Ranulph Fiennes. Donâ€™t worry—if you canâ€™t figure out that reference, a Feather Man in the film explains to all of us and his brethren why theyâ€™ve earned that frilly name. (Not to be confused with the witch mantra, â€œLight as a feather, stiff as a board,â€ of course). Jason Statham headlines this action packed tale about a group of assassins employed as Britainâ€™s Elite Special Air Service (hereon referred to as SAS). Tired of all the killing, Danny Bryce (Statham) retires himself after a bloody shootout results in the terrorizing of some innocent civilians (meaning children).

Fast forward a year later and Bryce now resides in Australia, where he has been canoodling with a neighbor in the Outback, Anne (Yvonne Strahovski, The Canyon), and receives a package informing him that his mentor, Hunter (Robert De Niro), has been kidnapped and his being held in Oman, where Bryce must travel to discuss his terms of release. A powerful Sheikh (Rodney Afif) has kidnapped Hunter in order to blackmail Bryce into assassinating three different SAS members that killed his three eldest sons. Bryce must first get them to confess on tape before killing them. Oh, and the Sheikh is dying and only has six months to live. Bryce cobbles together a team of other elite killing machine buddies (Aden Young, Dominic Purcell) and the heat is on. As he hunts the SAS members, another leader of a secret military society, Spike (Clive Owen) is hunting Bryceâ€™s team.

While Killer Elite does sport some decent chase scenes and meticulous action sequences, itâ€™s resoundingly poorly conceived in every other aspect, most notably, the terrible screenplay. Jason Statham is not a strong performer, but is obviously good in action sequences. Heâ€™s saddled here with playing the assassin with a heart of gold. Killing obviously torments him, but since heâ€™s such a good killing machine, he will never get away from â€œthe life,â€ his loved ones always used against him to kill the enemies of many a nefarious figure the world over. This gets old real quick. He grimaces at every needless expression of violence, fights for innocent bystanders, and doesnâ€™t let any part of the corpse go to wasteâ€¦.oh, that last part is a based on a different true story.

De Niro fares the worst. While his name no longer signifies quality, heâ€™s more than painfully awkward here. Being rescued from the clutches of the Sheikh, Statham lectures him about quitting the business while De Niroâ€™s dialogue sounds like he read his lines from a prompter, and he ends the exchange by asking about the Yankees. And Clive Owen, with a bifurcated eye that makes him look like a grizzled mutt, is way better than this material. He does his best to be a slick version of hardened characters heâ€™s already played and basically sails on through. Poor Yvonne Strahovski is saddled with a throwaway role as the love interest for Statham. The screenwriter chose to give her only one background detail—she wore plastic boots with eyes glued on them as a small child. These boots are referenced more than once. Worse, we have one minor character state that he should be called the MFWIC. This stands for Mother F***er Walks In Charge.â€ The trouble with an acronym is we all have the power to make up our own words, such as Much Film Writing Is Crap.

If youâ€™re a fan of churned out action films like Stathamâ€™s signature Transporter series, then Killer Elite may entertain. But if youâ€™re looking for quality that names like De Niro, Owen, or even the words â€œbased on a true story,â€ should evoke, you may feel a bit too elitist for this substandard fare.