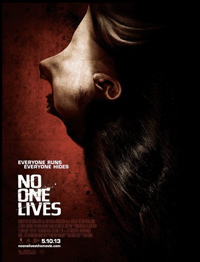 A half naked, terrorized female runs screaming through the woods, and she hurriedly scratches the words “Emma Alive” into the bark of a tree before she’s predictably recaptured. It turns out that Emma (Adelaide Clemens) was kidnapped quite some time ago, and the discovery of her carving renews the lukewarm search. Meanwhile, a ruthless band of burglars lead by the unyielding Hoag (Lee Tergesen) must resort to cold blooded murder after they’re caught red-handed during a daylight re-appropriation.

Fleeing the scene, the motley crew must leave behind all the booty, forcing the angry Hoag to demand trigger happy Flynn (Derek Magyar) to come up with a plan to get some quick cash to make up for the bloodbath. An unhappy couple in the midst of moving cross country with all their belongings, (Luke Evans and Laura Ramsey) happen to be at the same dive restaurant as Hoag and his crew and become the next unwitting victims of the ruthless criminals. But it’s not long before they realize they may have picked the wrong couple to mess with.

While Kitamura certainly fills No One Lives with a lively amount of gory sequences and set pieces (and at least one instance of unbelievable yet inspired gross out glory), more often than not, the film skips from one dull cliché to another, even as it attempts to launch a massive series of laughably implausible twists. However, the film could have managed to get by as more or less watchable with even these faults if it weren’t for the insipid screenplay. There’s no doubt that No One Lives would have made for a far superior silent film.

The cast includes a varying degree of talented names, but even the brighter pennies seem to have resigned themselves to the fact there’s nothing that can be done to doctor the dialogue. Some, like Luke Evans, seem to be trying their best. Others, such as Clemens (looking like a sour Michelle Williams) and Magyar turn in performances that are unworthy of their SAG cards. Kitamura seems focused more on amping up the gore factor than culling actual performances, and once again proving he’s attracted to outlandish, batshit crazy scenarios, but can’t seem to bother to fine tune his material for sustained interest. No One Deserves To Live would have been a more accurate title for the scenario at hand.