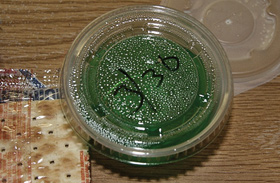 A common description of Woody Allenâ€™s Interiors (1978) is that itâ€™s a Woody Allen film drained of all comedy. One could make a similar statement about Brian M. Cassidy and Melanie Schatzkyâ€™s first feature length documentary, The Patron Saints â€“ itâ€™s like a horror film drained of all the horror. What remains is a disconcerting sampling of realism thatâ€™s more moving than any genre frills in this account of the lives of a few nursing home residents in one particular nursing home. Itâ€™s not a treatise on the nature of nursing homes or care that may be provided there, but rather a recording of faces and voices in what may be their final stopping place.

The Patron Saints is loosely narrated by the homeâ€™s youngest patient, Jim, and we learn that this is a home for both the aged and disabled. Jim is quite lucid, and seems to know quite a bit about everyoneâ€™s business. He fills us in on the matter of fact details and other snippets about himself and some of the residents we see, his voice sometimes coming from off screen as we watch desolate landscapes or horizons. At times, what weâ€™re watching seems almost an invasion of privacy, especially coming across residents in their more absurd moments, whether scratching themselves in private places or fixating on wanting their coffee. And then thereâ€™s some disquieting and upsetting scenes, in particular, learning of one womanâ€™s molestation at the hands of her brother, or one woman suffering from dementia, who cries for her mother and repeatedly moans â€œI canâ€™t get out of here.â€ Shots of arthritic, withered hands reaching for the camera and close-ups of faces battered by time are chilling and memorable, while emotional families visiting are subtly upsetting. One patient thatâ€™s asking to die is told, warmly, â€œYouâ€™re not going to die. You have to wait.â€

As the film wraps up, weâ€™re treated to Jimâ€™s narration about excessive amounts of trash and the camera shows us several minutes of trash heaps and trash compacting. Thereâ€™s a haphazard lazy way about how we throw things away that are of no use anymore. Perhaps this is too obvious an association, but that doesnâ€™t mean itâ€™s any less effective. The Patron Saints is a documentary in the true sense of the word as thereâ€™s no question about factual accuracy; this is simply a realistic â€˜day in the life ofâ€™ snapshot. However, the methods of extreme realism align this film with works of certain European art-house filmmakers, in particular, perhaps Ulrich Seidl (Animal Love, 1996). Subject matter combined with a fly-on-the-wall vantage point makes this one of the few films where voyeurism feels like being a spirit drifting between rooms, observing patients awaiting death. Itâ€™s like Emily Dickinsonâ€™s version of Enter the Void (2009), and perhaps youâ€™ll think of her words about death and how he kindly stops for us, as we gaze out the back of an ambulance carrying away a corpse, while the desolate trees fly by in the sky and we fade to black.