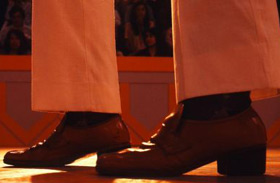 Despite wearing the same threads, sharing the same dance moves, and it all taking place in, more or less, during the same calendar year, similarities between the fictitious personalities of Saturday Night Feverâ€™s iconic character and Cannesâ€™ Director Fortnightâ€™s Chilean entry work couldnâ€™t be more different. For starters, the central character in Pablo Larrainâ€™s bold, imaginative and hyper violent commentary on Pinochetâ€™s government rule is triple the age of the John Travoltaâ€™s character, but more importantly, Larrain devises this character to personify the brutality of a government responsible for torture, murder and the disappearance of many of its people. Tony Manero manages to take this gloomy period in Chileâ€™s history and thematically infuse it in a chaotic main character. Despite the extremely violent depictions, and a sometimes harshly looking handheld grade of the picture, this is one set of outbursts worth stomaching.

Set during the curfew controlled, dog eat dog atmosphere that once besieged Chileâ€™s capital city of Santiago, there are apparent strands of normalcy allowed to perforate the tense climate. Disco dance lessons, movie theaters with American films and popular, ditzy televisions variety shows are available to all, but the narrative is there to remind us that this is a false sense of refuge. Screenplay duties shared between Larrain, the filmâ€™s lead Alfredo Castro and Mateo Iribarren assure that the picturesâ€™ protagonist dives back and forth between banal daily life existence and a compulsiveness that keeps the storyâ€™s pulse constantly on the edge. In between the dance rehearsals, the careful navigation of the neighborhood streets and perfecting his moves and mannerisms in view of the upcoming television competition, Castroâ€™s Raul (the actor looks like a worn out version of a 1970â€™s/80â€™s Al Pacino) fits the anti-hero model. Perhaps a term â€˜psychoâ€™ is more fitting, especially when he goes from helping an elderly victimized woman who has just been mugged and then in turn starts whaling on her, or, when he does whatever it takes needs to build the replica disco dance floor. Castro desires a word of mention for taking on such an ugly character.

Oddly enough, the 50-plus year-old with black shoe polish colored hair also happens to be a magnate for the opposite sex. A circle of women only knowing his brute mannerisms and professionalism on the makeshift dance floor havenâ€™t got a clue as to where his obsession ends. What is fascinating about character is his since of normalcy, he lacks a moral compass from which to work from and the ascension of his obsessive behavior adds unpredictability to the tone of the film. The out of focus, handheld aesthetics, muted and degraded colors add a touch of realism and vintage to the film, and for a period pic working with such a politically charged subject matter, Tony Manero takes a risky, disturbing, but rewarding road in deciphering the air of the moment.