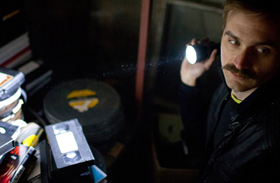 We all know it goes without saying that the problem with the anthology or omnibus film is that there are always portions that are better than others, and the overall appreciation for the film will be whether or not the good segments outweigh the mediocre. In the case of V/H/S, which sports segments directed by some of the most exciting new voices in horror (West and Wingard in particular), thereâ€™s definitely more to love than hate, and is both an homage to genre classics (like the always fun Creepshow, 1982) and an embrace of todayâ€™s popular genre device/gimmick, the found footage film.

The unifying framework, directed by Wingard, is a group of reckless young boys videotaping their antics (like holding down girls in public and pulling out their breasts) right before we see them breaking an entering in a foreboding house where they are convinced there is VHS tape that contains something they intend to make a shitload of money from. What they discover is an old man, appearing to be dead, in a dark room full of static television sets. In the basement, they discover a box of tapes, and they begin to watch them in the room with the dead man to find the prize tape.

Weâ€™re first treated to David Brucknerâ€™s tale about a group of three horny young men, one of whom has a pair of special glasses with a camera microphone built into them. As the three get drunk and lure back two young women to their shared hotel room, all hell breaks loose when one of the young women doesnâ€™t turn out to be quite normal. For Ti Westâ€™s segment, a young couple (played by Swanberg and Sophia Takal) are on a road trip haphazardly documenting their experience. While holed up in a cheap motel one night, Swanberg is approached by a disturbing female asking for ride. When she is denied, it appears that she may be stalking them. And for Swanbergâ€™s directorial effort, which is all told via Skype, the female part of a long distance couple feels a presence in her apartment at night, and she continually wakes her boyfriend so that he can see, via the computer, the strange presence of what appears to be a young child. Oh yeah, sheâ€™s got this strange lump in her arm she keeps tearing at, too.

Glenn McQuaidâ€™s segment focuses on a group of four twentysomethings going on a vacation in the woods. All is hunky-dory until the strange girl reveals sheâ€™s brought the other three up there for bait so she can catch a serial killer that only shows up on videotape. And finally, a group of YouTube filmmakers known as Radio Silence directs a creepy segment about a group of young men all dressed up for Halloween (the camera is in the costume of one of the men) on their way to a haunted house party, where it turns out the house may actually be haunted.

Overall, V/H/S is a slick and fun little romp of offerings from some newer voices in horror cinema. A much publicized incident of a couple vomiting and suffering seizures during the premier screening at Sundance 2012 may have has more to do with altitude sickness rather than disturbing imagery, as most of what occurs is quite tame by todayâ€™s horror standards. But the two standout elements of the anthology are the book ends. David Bruckner, who previously directed a segment of the intriguing but disappointing The Signal (2007) gives us a delightfully eerie segment about a very strange female and is reminiscent of those really good episodes of Tales From the Crypt or The Twilight Zone. The same can be said for the haunted house segment from Radio Silence, a short film that proves that the worn out found footage genre is perhaps perfect for the short narrative and may not just be the trashy a gimmick weâ€™ve been hammered into consuming from the influx of todayâ€™s mainstream horror films.