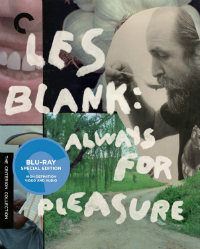 Many people may know Les Blank most for his association with Werner Herzog, who he filmed while on the brink of creative madness in Burden of Dreams and earlier in Werner Herzog Eats His Shoe, in which the notoriously true-to-his-word filmmaker indeed ate his shoe after having promised he’d do so if Errol Morris managed to finish his pet cemetery film, Gates of Heaven. But those ignoring the larger majority of Blank’s overflowing oeuvre would be sorely missing out on the jubilance of life that the quietly curious documentarian managed to strike on film with just his trusty 16mm Eclair, his appreciation for cultures of all kinds, and a fervent hunger for life. Sadly, Blank passed away in the spring of last year, just weeks before receiving the Outstanding Achievement Award and a restored retrospective of his body of work in Toronto at the Hot Docs Film Festival, though a great many of these films (14 features and 4 shorts to be exact) are now available in a glorious new box set from the Criterion Collection entitled Les Blank: Always For Pleasure.

Burden of Dreams falls right in line with Blank’s tendency to seek out characters of extraordinary personality and artistic ambition, but lacks a key element exhibited by the films that came before and after. Delving into the fringes of American life, his generous poetically ethnographic works like Spend It All or Yum, Yum, Yum! A Taste of Cajun and Creole Cooking, in which the culturally wealthy, poverty stricken Cajun lifestyle in rural Southwest Louisiana is portrayed with striking verve. Like most of his films, they’re teeming with wonderful live music, intimately reflective conversation on life, and plenty of respect for the local culinary practices, capturing the entire process from slaughter to consumption, presenting it all as if a cultural celebration.

Even before turning his eye to Cajun cuisine and the bayou born families that have carried on these culinary traditions, Blank found success filming southern blues players in The Blues Accordin’ to Lightnin’ Hopkins and A Well Spent Life. These films are more than just musical portraits that document overlooked musical Americana, these films ruminate on the harsh rural lifestyle that gave birth to such bittersweet music. He gives screen time to the community and relationships that give life to these songs of hardship, and the films give back with unheralded cultural richness and more emotional depth than ten thousand gallons of gumbo.

It is for this precious cultural encapsulation that two of Blank’s films were selected for preservation in the United States’ National Film Registry by the Library of Congress, one of which, Garlic is as Good as Ten Mothers, has thankfully been included within this invaluable set. Blank is one of only three documentarians whose work has been nationally recognized for presentation, and though two features have been selected, seeing so many of his films presented as a collection makes it hard to choose one as being more culturally or even artistically more important than another. How could one choose the hippy love-in feature God Repects Us When We Work, but Loves Us When We Dance over the eccentric examination of female beauty in Gap-Toothed Women? Or the portrait of polka gatherings in In Heaven There Is No Beer? over the city wide celebrations of Mardi Gras in Always For Pleasure? Each of Blank’s films are outstanding ethnographic achievements that brim with the auteur’s own quirky personality – every one invaluable works of art and historical record of an America that no longer exists.

There have been a slew of immense, comprehensive box sets released this year, but few of them capture the nature of their filmmaker or present the films with such care and aplomb as the Criterion Collection has with this package. Containing fourteen of Les Blank’s most well regarded films, including The Blues Accordin’ to Lightnin’ Hopkins (1968), God Respects Us When We Work, but Loves Us When We Dance (1968), Spend It All (1971), A Well Spent Life (1971), Dry Wood (1973), Hot Pepper (1973), Always for Pleasure (1978), Garlic Is as Good as Ten Mothers (1980), Sprout Wings and Fly (1983), In Heaven There Is No Beer? (1984), Gap-Toothed Women (1987), Yum, Yum, Yum! A Taste of Cajun and Creole Cooking (1990), The Maestro: King of the Cowboy Artists (1994), and Sworn to the Drum: A Tribute to Francisco Aguabella (1995), this set is absolutely critical for anyone interested in documentary filmmaking or the preservation of American culture on the fringes. Every single one of the films included have been stunningly restored and presented in glorious HD, highlighting the fine details in all of the flowers, faces and foods Blank so loved to zoom in on. Each film is paired with vibrantly uncompressed mono audio tracks, except Sworn to the Drum, which is presented in stereo. Packaged as a three disc set, this digipack is beautifully nestled within a hefty slipcase alongside the thick booklet that expands the breadth of coverage even further.

Short Films
Packaged along with the fourteen main features (some of which one might consider shorts themselves) are four shorts that Blank constructed from outtakes, one from Lightnin’ Hopkins leftovers titled The Sun’s Gonna Shine (1968), one from Always For Pleasure extras called Lagniappe (2006), two that revisit the Sprout Wings And Fly footage in My Old Fiddle: A Visit with Tommy Jarrell in the Blue Ridge (1994) and Julie: Old Time Tales of the Blue Ridge (1991), as well as a short that spans another ten years after the first Maestro film titled The Maestro Rides Again! 94 min

Featurettes
Broken into various appreciations and remembrances from those who knew and worked with Blank, including likes of Werner Herzog, Taylor Hackford, Skip Gerson, Maureen Gosling, Susan Kell, Tom Luddy, David Silberberg, Chris Simon, Alice Waters, Gerald Gaxiola and even Blank’s own son Harrod. Each piece is film specific, so, despite being from the same set of original interviews conducted by Criterion, they are split up into many little easy to digest pieces that speak volumes about Blank’s character, his moral standing, and his passion for food, music and cultures of all kinds. Most of the included pieces are anecdotal, recounted by astute storytellers, and thus incredibly enriching on all grounds. 165 min

Lightnin’ Hopkins Musical Outtakes
A pair of song performances were cut from the film, so the Hopkins standard “Mister Charlie” and a new tune composed in honor of Blank’s fondness for poker called “Lightning Les” 11 min

Excerpt from ‘Les Blank: A Quiet Revelation’
This is but a glimpse of the in development documentary on the late director by his son Harrold and Blank’s former collaborator Gina Leibrecht. Think of it as an extended trailer. 10 min

Booklet
Nestled within the beautiful slipcase is a 57 page booklet that packs tons of gorgeous stills and production photos alongside intros and credits for each film, as well as an extensive critical essay by Andrew Horton. Stunningly gorgeous.

This release couldn’t have a more fitting title. Les Blank: Always For Pleasure is simultaneously sumptuous and gratifying in the same way that stories told by reminiscing grandparents garner nostalgia for a time and place you never knew, yet you feel the heart and soul of this culture now gone still surging on with a strangely natural exuberance. Blank’s ability to capture the sheer joys of life through honest, intimate situations, while capturing a wide view of one’s cultural heritage is absolutely unparalleled. No release this year bears such great historical importance and still possesses the ability to inspire cinematic elation. So, open this beautiful box up, sit back, crack open a beer, and enjoy just as Les Blank would have wanted. Cheers!