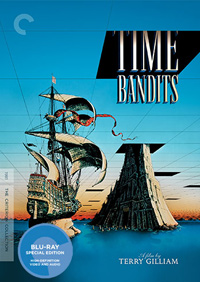 Terry Gilliam’s second solo directorial effort, Time Bandits, remains an oddly hilarious bridge between his work with the Monty Python gang and his subsequent dystopian solo films like Brazil, Twelve Monkeys and even last year’s The Zero Theorem. Drenched in English dry wit and warped by the cartoonist’s soul that pervades all of Gilliam’s work, the film sees a gang of little people abandoning their posts as the creator’s right hand men to leap through the corridors of time pillaging as many treasures as they can drag with them, while a child gets wrapped up in the mischief along the way. Of its period in more ways that one, it feels a bit like a valiant attempt at emulating Spielberg with Gilliam-Goggles on.

With a stolen map of all time and space in hand, the little gang of burglars, led by Randall (played by a hilarious David Rappaport) accidentally wander into little Kevin’s (Craig Warnock) bedroom via a wormhole-ish port in his wardrobe and accidently bring the boy along with them on to their next robbery stop. As a ragtag band of arguing pirate-esque brutes, they pay visits to historical figures like Robin Hood (played cheekily by John Cleese), Napoleon (Ian Holm at his comic best) and King Agamemnon of ancient Greece (Sean Connery playing it a bit flat and under-utilized), and fantastical ones like the Winston the Ogre (played with middle-aged verve by Peter Vaughan), pocketing gold and jewels as they merrily make their way from one time period to the next with a greedy Evil (David Warner hysterically commenting on the technologic uselessness of his rivals organic creation’s) and their boss the Supreme Being (Ralph Richardson) nipping at their tails.

Amidst the constant comedic calamities that line this raucous adventure, Gilliam manages to still find time to comment on the bigger issues at hand, like, why would the Supreme Being allow Evil to exist if he was as all powerful as he claims? Its a valid question, being that his leading gang of mischievous mini-men, though charmingly charismatic, are essentially terribly immoral beings that corrupt an innocent 11-year-old boy by committing him to a crime spree spanning nearly all human history. Yet, he answers it flittingly, something about free will. Time Bandits reaches through the portholes of time with a free-wheeling freedom that allows him both the privileges of surrealism and the headiness to contemplate the philosophical and technological all within a wiley two hours. Though it’s no Brazil, the film remains a benchmark for the singular filmmaker.

Cleaned up and crisp as all get out, this release has been blessed with a wonderfully vibrant HD transfer from a new 2k restoration with a matching LPCM 2.0 track that possesses an impressive amount of aural depth. With so much visual texture in the lush costuming and extraordinary set design, the high resolution upgrade surely improves detail and color accuracy quite a bit. The single disc is packed in one of Criterion’s classy clear cases, nestled safely inside a sleek lenticular covered dust jacket.

Creating the Worlds of Time Bandits
Production designer Milly Burns and costume designer James Acheson reflect on designing the sets and costumes for each of the different period costumes for the film in this detail oriented new featurette narrated by writer David Morgan and featuring production notes and sketches. 24 min

Terry Gilliam and Peter von Bagh
Originally filmed as part of the the Midnight Sun Film Festival in Sodankyla, Finland, in 1998, this lengthy conversation between Gilliam and film scholar Peter von Bagh sees the two discuss the filmmaker’s childhood upbringing in Minnesota, the influence of various artists, comedians and filmmakers on his work, being a cartoonist, working on Time Bandits and more. 80 min

Shelley Duvall
Presented as an excerpt from a 1981 episode of NBC’s Tomorrow show in which Shelley Duvall speaks with host Tom Snyder about Time Bandits, The Shining, working with Robert Altman and realizing that was a star after being recognized in a fast food drive-thru. 9 min

Stills Gallery
A collection of scrollable behind-the-scenes stills from the making of Time Bandits.

Audio Commentary
Originally recorded for the Criterion Collection back in 1997, this commentary features director Terry Gilliam, co-screenwriter and actor Michael Palin, as well as actors John Cleese, David Warner, and Craig Warnock discussing how the film came to be, the process of making it, and how they look back on it. Being that comments seem to have been recorded individually, the track is a bit stuffy, rather than conversational.

Theatrical Trailer
Written as if a sketch from Monty Python’s Flying Circus, this is a perfectly written meta-trailer that riffs on the monotony of movie trailers of the time. 4 min

Booklet
On one side of this fold out leaflet is a replication of the map from the film, while on the other is a lovingly rendered essay by David Sterritt, as well as film credits and transfer info.

As an early touchstone to what one might call Gillianisms, Time Bandits is rife with visual, physical and thematic exaggerations that stretch the boundaries of cinematic conventions to form a crazed comedic concoction of time traveling little people that dares to pose questions well outside the realms of broad comedy. A visual feast thanks to the likes of cinematographer Peter Biziou, production designer Milly Burns and costume designer James Acheson, the film remains a very entertaining watch, despite some minor stale comedic passages. Terry Gilliam fans should rejoice, as Criterion has put some effort into this lovingly revamped release.