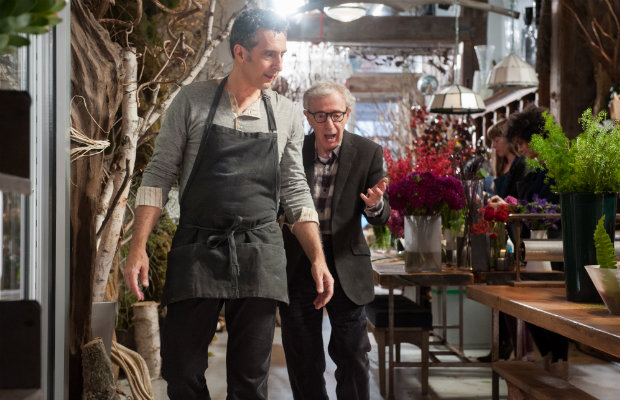 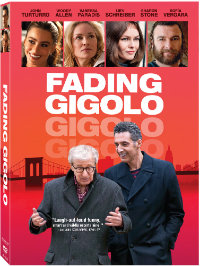 After making a substantial profit at the box office during its Spring 2014 release (via Millennium Ent.), the mild media fury surrounding the continuing Mia Farrow/Woody Allen saga was still in popular parlance, which many assumed might hurt ticket sales. Apparently this wasn’t the case and critics and audiences seemed to embrace a chance to see Allen in front of the camera in a lightly entertaining role. Repeated viewings may crumble Fading Gigolo‘s mild comedic offerings, but its warm theatrical response should ensure a healthy shelf life.

John Turturro’s latest directorial effort was helped by the sizeable presence of co-star Woody Allen. But beyond drama from the gossip rags, Turturro’s got a perversely curious concept on his hands by casting himself as a reluctant gigolo with Allen starring as his affable pimp. That said, this central concept kinda sorta fizzles out as the film becomes a more tender observation about loneliness and connection that lends the film a rather uneven tone, unable to satisfy either the audience seeking a frothy adult sex comedy or those surprised by a rather somber (yet more satisfying) subplot.

Forced to close his rare and used bookstore that has been in his family for generations, Murray (Woody Allen), has a proposition for his best pal, Fioravante (Turturro), himself the owner of a struggling floral shop. It just so happens that Murray’s dermatologist, Dr. Parker (Sharon Stone), has revealed that she wants to engage in a ménage a trois with her best girlfriend, Selima (Sofia Vergara), but the rich vixens seem to clueless as to how they’d go about setting it up. Murray offers up his friend Fioravante as a gigolo, much to his friend’s reluctance. Dr. Parker insists on a one-on-one session first, after which she finds herself rather taken by the experience, and likewise for the more brazen Selima. But when Murray introduces Fioravante to Avigal (Vanessa Paradis), a widowed and extremely conservative Chasidic Jewish mother of six children, the two lonely souls seem to build a rather tenuous yet warm affection for one another, which is complicated for Avigal due to her religious restrictions. Of course, his growing feelings for Avigal puts Fioravante in doubt as to the impending three-way, and things are further complicated by Avigal’s impassioned admirer, Dovi (Liev Schreiber), part of the neighborhood watch.

This is the fifth film Turturro has directed, another eclectic entry in an intriguing filmography. An actor that has been cast many times, seemingly, for his unique look (Quiz Show should come to mind), Gigolo seems an unlikely vehicle for the performer, yet age has leant him an allure that makes the role work.

If anything, it’s the supporting cast that often feels out of place. Sharon Stone and a thankfully toned down Sofia Vergara are stunningly beautiful, yet they have the time and resources to have any type of man they could possibly want. Why would a woman that looks like Stone confide her need for sexual pleasure in a client? It’s these kinds of questions that make the set-up actually kind of off-putting, leaving Allen to steal all the laughs with his customary wit and intelligent one-liners, here in a relationship with Othella (Tonya Pinkins), a mother of four.

And, perhaps most interesting, is the striking Paradis, a casting choice that seems somewhat dubious, but her performance lends a rather melancholy tone that’s surprising. Unfortunately, the budding relationship with Fioravante is abruptly dealt with, played out in a fashion that seems to indicate Turturro didn’t want to make casting Liev Schreiber seem like a total waste.

Presented in the new HD standard 16:9 widescreen aspect ratio, Turturro’s Gigolo isn’t made any more visually striking for home viewing, yet it’s rather cozy Sunday afternoon type of offering. Turturro provides audio commentary, and additional special features are limited for a rather standard package all around.

Deleted Scenes
Three deleted sequences are included. An alternate opening, which introduces Murray and Fioravante’s predicament of having to close down the bookstore; an improvised scene between Allen and the children belonging to Tonya Pinkins’ character; and an extended sequence of a naked Sharon Stone during her first interaction with Turturro’s gigolo.

As a rare chance to see Allen in front of the camera outside of one of his own films, Fading Gigolo is an interesting exercise (one of his last outings was in 2000’s Picking Up the Pieces, which also starred Stone), but one whose whole is not as entertaining as some of its disparate parts.