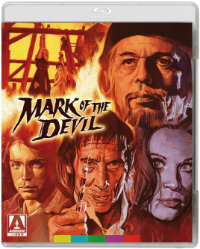 The local witchfinder known as the Albino (Reggie Nalder) is the most feared citizen in his small Austrian village, burning women as witches when they deny his lascivious advances. But a new witchfinder has settled into the village, Lord Cumberland (Herbert Lom), who brings with him a young apprentice, Count Christian von Meruh (Udo Kier). Christian doesn’t take kindly to Albino’s tyranny over the poor womenfolk in the village, and he intervenes in the accusation of a beautiful bar maid (Oliver Katarina). But Christian’s master proves to be as equally debauched, and soon the townsfolk are rather tired of living under the fear of random accusation.

Long before men diagnosed women with maladies like hysteria and dementia praecox, there was the unseemly tradition of accusing wayward members of the fairer sex as witches and burning them at the stake. And so Armstrong’s film opens with a semblance of seriousness as it proclaims to outline three true instances of despicable treatment (however, there’s a generous helping of ‘extra’ salaciousness in peripheral ‘reenactments).

Wildly misquoting the number of actual Europeans burned at the stake, Mark of the Devil relishes in its ability to shock and disgust, causing the film originally to be cut upon theatrical release. But later marketing campaigns played up its provocative subject matter, guaranteeing audiences that they would be made sick, handing out vomit bags, and it was famously declared as ‘positively the most horrifying film ever made.” This was all William Castle styled propaganda, though for the time period, the title certainly is rather unpleasant, continually forcing us to watch distractingly beautiful women sadistically treated, with Olivera Katarina’s barmaid taking most of the heat in her extended screen time as a love interest for Udo Kier and a plaything for Reggie Nalder. These two performers are what makes this exaggerated film worth watching in the first place.

Kier is presented in one of his first lead roles, and he’s a striking presence, though his signature speech patterns are dubbed over (the same treatment he received in many of these Euro productions, like Suspiria). But the most grotesque aspect of the film has to be Reggie Nalder’s nasty turn as the territorial witchfinder that doesn’t take kindly to Kier’s meddling. Top billed star Herbert Lom doesn’t make much of an appearance until the second half of the film, and even then seems less significant.

A revered cult item, Arrow Video unleashes a lovingly packaged remaster of the title. Presented in 1.66:1 aspect ratio, the high def transfer retains the original film’s rough grain, and it plays like a nicely scrubbed vintage artifact. Michael Holm’s sing-songy score (which sometimes sounds like “Beyond the Sea”) opens the film’s initial sequence where a cluster of nuns get viciously raped, and we hear snippets of the tune throughout the rest of the film. The disc is packed with notable extras well worth exploring.

Mark of the Times:
A 47 minute documentary concerns the ‘new wave’ of British horror directors appearing in the late 60s and 70s in response to the growing familiarity of Hammer’s horror output (even though they were producing a wide variety of non-genre content, as well). Featured interviews from Armstrong, directors Norman J. Warren (Terror), screenwriter David McGillivray (Frightmare), Professor Peter Hutchings (author of Hammer and Beyond) and film critic Kim Newman make this well worth the watch, including its discussions of the work of Pete Walker.

Hallmark of the Devil:
Author and critic Michael Gingold (Fangoria Magazine) discusses the output of Hallmark Releasing, the distributor that released Mark of the Devil in the US. The feature runs twelve minutes with Gingold reminiscing how Hallmark was often creative with its marketing campaigns, including making up its own rating of V for Violent with this title.

Interviews:
Interviews from Udo Kier, Composer Michael Holm, Herbert Fux (who stars as the Executioner), Gaby Fuchs (starring as Deidre von Bergenstein), and Ingeborg Schoner (the Nobleman’s wife) are worth traipsing through, each segment preceded by a reel of clips of the actor in the film (the exception being Holm, whose segment is twenty four minutes). Herbert Fux’s interview runs about twenty three minutes, with the other segments each around ten minutes. Four minutes of audio interview from Herbert Lom is also included.

The Mark of the Devil – Then and Now:
The shooting locations of Mark of the Devil are revisited in this seven minute feature through a variety of comparative stills with the film’s distinctive theme played for our enjoyment.

Outtakes/Gallery:
Three minutes of outtakes are included, spliced together as music plays over them. Also, nearly a minute long slideshow of gallery stills are included.

Oddly disquieting despites its exaggeration, many filmmakers have tapped into the ambience of these periods throughout the decades, both in European and American art-houses (and there have been plenty of dreadful misfires trying to regenerate interest in the period, such as the 2011 Nicolas Cage headlined Season of the Witch). While Armstrong spent too much orchestrating his torture sequences when he could have at least made his female victims more than mere distracting models, fans off this period of filmmaking should find this a remastered title ripe for revisiting