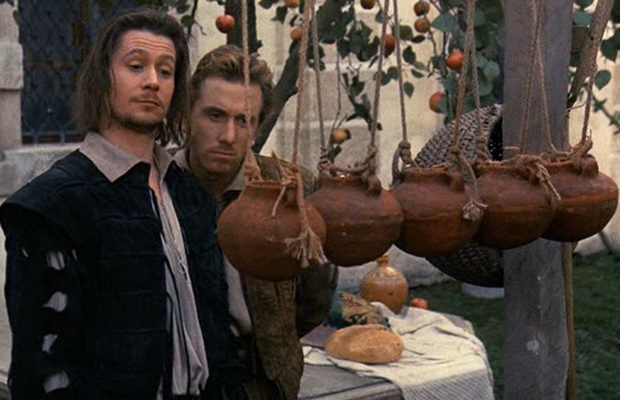 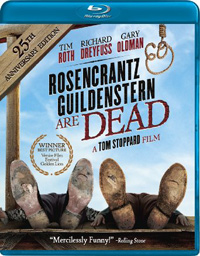 Shakespeare’s portrait of the brooding, potentially psychotic Danish prince Hamlet is arguably the Bard’s most notable play, as well as a veritable support beam within the literary canon. We’ve seen countless cinematic adaptations, contemporized for modern audiences, anachronized for the kitschy crowd, and usually abridged for the medium. But out of this was born an inventive farce which has taken on an iconicity of its own from the perspective of two minor supporting characters with Rosencrantz and Guildenstern Are Dead. Playwright Tom Stoppard penned the intelligent comedy in 1966 and made his solo directorial cinematic outing with the famous 1990 film version which took home the Golden Lion at the Venice Film Festival (where Gore Vidal was president, no less). Although fans of Shakespeare’s source text will most likely continue to be entertained by Stoppard’s impressive meta-textual accomplishment, this reputable adaptation of his own material often feels a bit flat.

Rosencrantz (Gary Oldman) and Guildenstern (Tim Roth), who we know as Hamlet’s old college friends sent to accompany him on a fateful journey to England, suddenly find themselves alone and unaware of who they really are. With much deliberation they determine their assigned names (or do they?) and eventually are compelled to wander into their old friend’s current dilemma, unaware they’ve been scripted to do so. On their journey to figuring out what purpose they serve, experiences are shared with a traveling acting troupe (led by Richard Dreyfuss).

Stoppard’s film expands on the Bellerophonic aspect of Rosencrantz and Guildenstern’s existence. We still know their fate, a decree they ignorantly transport themselves in a certain letter. Stoppard plays up their buffoonery with touches of existential glee—we’re never quite sure which character is which, a running joke throughout because it hardly matters if we distinguish who Roth and Oldman actually are. Dips into familiar moments of Hamlet’s universe are of passing interest, for as ambitious as Stoppard’s original perspective is, we aren’t allowed to stray from the trajectory. If Gregory Maguire happened to pen the tragedy of Macbeth from the perspective of the three witches, the ultimate fate of the power hungry general and his unscrupulous wife would still be the same….so what matters here is the narrative unfamiliar to us, which often seems bogged down in esoteric playfulness.

As such, Rosencrantz and Guildenstern Are Dead feels most enjoyable for those immediately familiar with Hamlet (particularly if you’ve recently read it). One may embrace how we’re left to figure out where and how Roth and Oldman factor into familiar moments of Shakespeare’s text, but this thrill outwears its welcome. Instead, we become more enamored with the energetic interruptions from Richard Dreyfuss as the leader of the traveling acting troupe. “We are not like regular people, we are actors,” he declares, censuring Rosencrantz and Guildenstern for departing their presence because without an audience, the troupe’s actions become meaningless.

Unfortunately, it’s difficult not to dismiss Stoppard’s film treatment of his own play as a grand exercise in pretension because he’s unable to fashion the intelligence of his prose into a compelling visual medium. The incredibly prolific playwright and screenwriter wouldn’t enter the director’s seat again, but his arguably unparalleled creative Shakespearean inspirations would go on to win him an Oscar for penning 1998’s Shakespeare in Love. But for as mawkish as the later John Madden film feels, Stoppard’s Rosencrantz tends to have the opposite effect because its characterizations are set aside for the enjoyment of a crowd more concerned with the in-jokes. Obviously, by changing the perspective of Hamlet’s narrative to that of the minor players, our interpretation of what the play is about changes—-but Rosencrantz and Guildenstern are still the clueless bastards who end up exactly where the audience already knows they will. So perhaps the deliberation really is whether or not they are dead from the start, as the title indicates. If only the film version could hold our attention long enough to deliberate Stoppard’s playfulness. But between “To be,” or in the case “To have been,” does it really matter?

For its 25th Anniversary, RLJ Entertainment presents the notable title for the first time on Blu-ray in 1.85:1. Picture and sound quality are dependable, while several interviews are included as extra features, such as a brand new conversation with Stoppard.

25th Anniversary Interview with Tom Stoppard:
Michael Brandman interviews Stoppard in London for the title’s 25th anniversary. The hour long feature finds the playwright reminiscing on the experiences, including his preparations for directing (such as visiting the set of 1988’s Working Girl).

Archive Interviews:
A quartet of archive interviews featuring Stoppard, and the three main cast members are also included. Each interview is rather substantial, ranging an hour each (with Roth’s segment at half an hour).

Tom Stoppard’s original play Rosencrantz and Guildenstern Are Dead is a notable Shakespearean homage, one of the few to have acquired a similar repute. Fans of the original stage play will most likely enjoy Stoppard’s film version, but this treatment feels far less dynamic or lively.