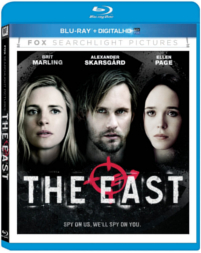 Seemingly a perfect union, the writing duo of director Zal Batmanglij and his hypnotic on screen muse, Brit Marling, return to the big screen with their second collaboration, The East, an excellent Sundance preemed,  political thriller that riles with the ideologies of environmental extremism while building upon the cultist culture that they explored in their mercurial debut, Sound of My Voice. This time bearing the budget of a modest Hollywood production, a cast that boasts names like Alexander Skarsgård and Ellen Page and a release that surprisingly didn’t go bigger, their sophomore feature feels like the work of a major studio, a slick, highly commercial production that surprisingly refuses to compromise its morals. Taking us headlong into the controversial underworld of so called ‘eco-terrorists’ through an undercover agent who’s allegiance becomes blurred, The East sees Batmanglij making the leap from indie darling to major league filmmaker without sacrificing auteuristic assurance.

Unsurprisingly, Marling takes the lead as Sarah, a wicked smart young agent under contract by an independent intelligence agency, playing her with straight-laced confidence, free of the spaced out despondency we’ve repeatedly seen from her prior. Going incognito, her mission is to find and identity the members of an environmental extremist group, mysteriously dubbed, The East. Through a series of convenient coincidences, exquisitely tense suspicions and eerily conceived initiations, Sarah winds up falling in with the group, who’s membership includes the rapturous radical Izzi (Page), a flaky gender-bender in Luca (Shiloh Fernandez), Doc (Toby Kebbell), the brains and heart of the group, and Benji (Skarsgård), the grizzled leader, among others. Operating with the routines of a cult and the ideals of the Earth Liberation Front, the group devises and executes a series of ‘jams’ that threaten to publicly expose the havoc reeked by irresponsible corporations while personally attacking the figure heads that lead the cover-ups, and it isn’t long before Sarah finds herself under the spell of her vehement cohorts, seriously contemplating the legitimacy of The East’s extreme enterprises.

Their targets are the likes of pharmaceutical giants and water tainting megacorps, worthy foes for any activists, but what makes them alluring adversaries here is that there is history within. Instead of relying on merely the political attraction, Marling and Batmanglij give us characters directly effected by these corporate leviathans. Where we would normally question the devious actions of extremists, we instead find ourselves actively rooting for them. This narrative tactic is utilized to empathetic effect several times over, but never so prevalent as when we learn of Doc’s misfortunes in taking a poorly tested, still approved medication that left him battling an assortment of crippling physical ailments. So, when the group attempts to serve the purveyors of the drug a taste of their own medicine, it isn’t hard to see why Sarah might feel for the cause.

With a considerable cast and ever prevalent human rights ethos, one might expect a bit of frivolity when it comes to characters, but just about everyone still finds their time in the sun. Just as Doc is fleshed out, Benji and Izzi receive similar authorial treatment played with resolute conviction, giving each of them depth where one might expect cardboard radicals. Sarah on the other hand is a character placed firmly in the moment, essentially a history-less vehicle for our own internal conflict. Through her double sided manner of appearance, her briefly revealed love life back home and slowly shifting appreciation for The East’s philosophies, Marling wraps us into her own struggle to retain allegiance to both country and the people who unfortunately entrusted their safety within its borders. By fully embracing this stratagem though, the film reveals its weakness. Sarah has little underlying motivation besides her own need for professional perfection and general humanitarianistic empathy. This is but a minor flaw that mostly works to the betterment of the story overall.

Matching the clarity and natural tones of the film’s theatrical presentation, Fox’s home release boasts extreme lucidity for the small screen with an equally impressive soundscape pushed by its DTS-HD master track.   Moody bass winds around to the surrounds, voices and music are crisp and clear.  While light on substantial extras, the disc packs quite an exciting reviewing experience in the feature itself.  It comes packed in a standard Blu-ray case.

Deleted Scenes
It’s always interesting to find that storylines we not completely settled through production, leaving the possibility for an alternate ending in the edit.  Included here, along with several other additional clips, is an alternate ending that was cut. 5 min

Theatrical Behind The Scenes
Featuring cast and crew, this brief series of six smaller featurettes shallowly discuss how the film was cast, some of its themes, and the inspiration behind the picture. 20 min

Theatrical Trailer
One of the better trailers for a more straightforward film this year, this is a brief but stunning little trailer, if a little misleading in tone. 1 min

A strong-willed film that would make for an interesting double feature paired with the eco-terror doc If A Tree Falls, Marling and Batmanglij’s sophomore feature is a politically propelled, morally complex work that wields the popcorn appeal of a summertime thriller, nimbly written and perfectly paced. One of those rare films that brings fringe affairs to the fore through broadly entertaining engagement, The East is a fiery, enthralling work of political fiction and a meteoric flare of hope for the future of mainstream cinema.