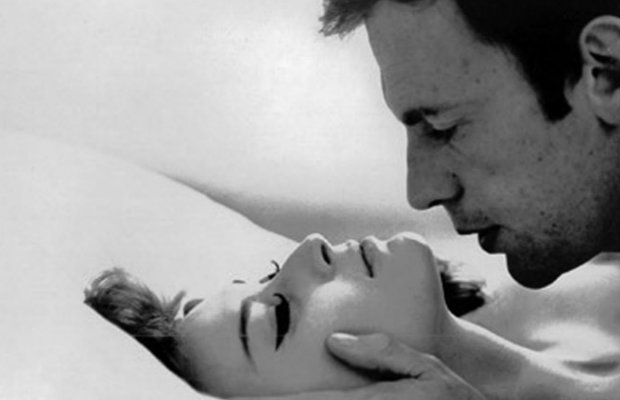 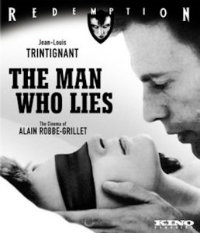 Redemption Films revives several more titles in its continuing resurgence of Alain Robbe-Grillet with his 1968 film, The Man Who Lies. Starring the director’s preferred leading man, Jean-Louis Trintignant, it’s an interesting exercise that seems perfectly calibrated for Robbe-Grillet’s style of filmmaking, that of the fractured, elliptical narrative. Here, we follow a protagonist who makes up his story as he goes along, which feels not unlike how Robbe-Grillet writes his narratives, where a series of accidental strands may or may not work together to create a discernible tale.

While running from a band of soldiers in hot pursuit, Boris (Jean-Louis Trintignant) stumbles into a small European town and ingratiates himself upon the community by claiming to be the friend of one of their missing citizens named Jean Robin. Arriving at Robin’s castle, he seduces his maid, his sister, and his wife, each telling them some fabricated tale about his associations with Robin. Everyone is more or less on board with his elaborate lies until another stranger, who might be Jean Robin, arrives.

The transfer of the film looks quite expressive and arresting, and Igor Luther’s (who worked regularly with Volker Schlondorff, on titles like The Tin Drum and Coup de Grace) cinematography is the title’s strongest asset. A lone extra feature, a chunk of the Robbe-Grillet interview that’s included on each Redemption release of his work, reveals that funding creates the real local flavor of this title, just as it does with several other works he’s known for. This explains the number of Slovakian names of the cast (not unlike how Istanbul became the locale for his debut, L’Immortelle). Likewise, the availability of a nearby hotel was the deciding force at filming in the castle featured here. And several notable details were spur of the moment influences and not something included in the original script, with Robbe-Grillet crafting the film in the same fashion that Trintignant crafts his identity within the film.

Classified as a resistance film, a genre popular to European filmmakers of the era, it’s an experimental follow-up to his previous success, Trans-Europ-Express. Though winning an acting award in Berlin for his performance, Trintignant tends to come across as rather forced and disjointed here. Of course, as the narrative demands, he’s constantly retelling several versions of reality. A weary and disinterested character late in the film has no patience for him. “Let me tell you my story,” is his constant refrain, to which he finally receives the response, “Is that really necessary?” And we rightfully feel the same. He’s endlessly contradicting himself, beginning directly with the moments where we see him fleeing soldiers as they shoot at him in the forest, narrating his new persona as Boris to us before introducing himself to the suspicious denizens of the small town he stumbles into.

Crafting his identity as the friend of one of their citizens, it’s a common trope that will remind you of plenty other films (in fact, the set-up isn’t terribly far off from Adam Wingard’s 2014 title The Guest, for a recent example of a similar scenario). And The Man Who Lies recalls Kafka’s The Castle, as well. It’s a series of other works that tends to make Robbe-Grillet’s film more involving than it happens to be (including the director’s commentary, which mentions homage to Pushkin’s play Boris Godunov as well). Strikingly photographed, there are moments of heightened interest that never quite elevate the film to its potential.