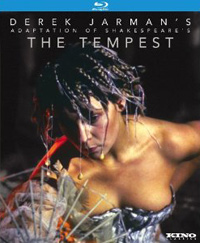 Shot entirely on location in the incredible Stoneleigh Abbey in Warwickshire, England, director Derek Jarman’s re-imagining of The Tempest is a bizarro Shakespearian fever dream that actually does stick to much of the original story, but incorporates Jarman’s signature homoerotic imagery and straight up odd visual style. If you know this classic tale, you’ll follow the story with relative ease, picking out bits and pieces of Shakespeare’s original dialogue, but if you don’t know it by heart, Jarman’s vision can quickly become a confusing mash of bugged out Old English recantation and supernatural struggles of power.

Like the original story, the film centers around the magician and ex-Duke of Milan, Prospero (Heathecote Williams), along with his beautiful daughter Miranda (Toyah Willcox) and their downright scary servant, Caliban (Jack Birkett), all of which now live alone in a decrepit mansion on an island. Only visible to Prospero, the shackled spirit of Ariel (Karl Johnson) also lives among them and has been promised freedom by the ex-Duke if he is able to lure the ship carrying Prospero’s traitorous brother Antonio (Richard Warwick) and his companions to the island for revenge. One of these companions happens to be the king’s son, Ferdinand (Peter Meyer), who Prospero schemes to set up with his daughter as a romantic, but covert power play on his behalf. With all of the unclear interweaving narratives, Jarman’s outlandish stylistic choices and little to no background delineation, the story becomes a whacked out pastiche in quite a hurry.

Jarman’s creation may be a misfiring patchwork of classic story telling and 70s art house freedom, but the film is certainly a unique take on the material. Nowhere else will you see Shakespeare’s dialogue in tandem with extravagant lounge sing-a-longs featuring countless dancing sailors and abundant male nudity. The mishmash is occasionally quite funny, but mostly extremely unsettling in its pure weirdness. Johnson’s performance as the creepily aloof Ariel and Birkett’s bug-eyed insanity as Caliban are constant sources of purported discomfort. If you can sort through the odd and the eerie, there are underlying issues of power struggles and autonomy, but Jarman makes it ever so difficult to focus in on them.

This film was shot on 16 mm and blown up to 35 mm for theatrical release, giving it is raw look, but the image does benefit from the HD format. Jarman’s body of work has really relied on the grit and grain of low grade film, but the bump in resolution really does give a depth and clarity not seen before. The uncompressed PCM stereo track is passable. Low budget in nature, the effects often sound campy and voices sometimes are hard to distinguish, but these issues are inherent to the picture, not the reproduction.

A Journey to Avebury
A silent 10 minute short composed of landscapes from the village of Avebury put together in rapid succession.

Garden of Luxor
Another silent short, about 9 minutes in length, features a variety of bizarre double exposures. There’s shots of people and pyramids, all behind what looks like a permanent blood stain.

Art of Mirrors
Running 6 minutes, this silent short revolves around people flashing sunlight into the camera while others stand about in costume.

Difficult as ever, Jarman’s take on Shakespeare’s final lone play is definitely a product of his own imagining. Laced with homoeroticisms, cabaret iconography, extravagant but dirty set design, and overall unsettling imagery, The Tempest has never or probably will never again be presented with such a bizarre spin on the material. Kino’s Blu-ray release of the film has preserved Jarman’s twisted vision with a decent transfer and a few rare shorts, though lacks any retrospective insight on the film. If you are a Jarman fan, this is an easy recommendation, but for those unfamiliar, you’ve been warned. It’s a weird one.