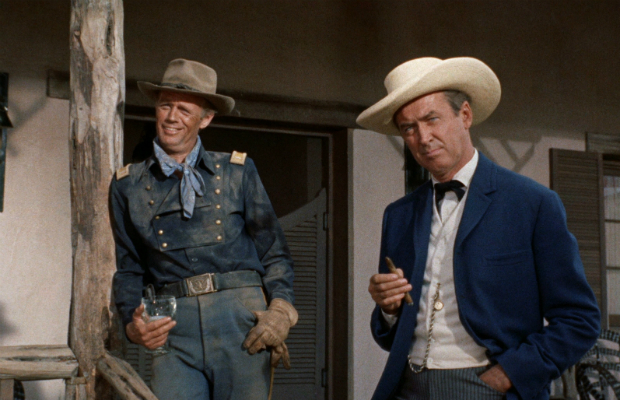 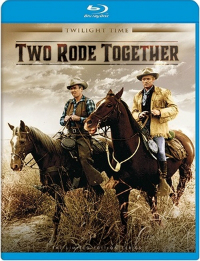 Born of the famously turbulent, yet ultimately fruitful collaboration between John Ford and James Stewart, Two Rode Together stands as compromised material. Ford took on the project strictly for cash shortly after the death of his friend and colleague Ward Bond passed away, sending the film into much darker territory than the director had ever or would ever normally work within. The picture was based on Will Cook’s novel “Comanche Captives”, material Ford apparently thought was less than intriguing western revisionism, even after bringing on his frequent collaborator Frank S. Nugent (The Searchers, The Quiet Man, Mister Roberts) to make something of the screenplay. Though certainly not as piercing as some of his work with his male muse John Wayne, the film remains a solid entry into the nihilistic anti-heroic take on the western.

As his most selfishly styled self, Stewart plays Marshal Guthrie McCabe, a public figure perfectly tailored for the slimy dealings of gun-toting frontier politics. Paid pennies on the dollar for his official duties as local lawman, he rides high on a rising tide of extortion of the local businesses, that is, until he’s summoned by the military to infiltrate the local Comanche community in search of missing women and children taken years before. Sent to chaperon McCabe on his official assignment is First Lt. Jim Gary, played by a strikingly wholesome Richard Widmark. The pair set off into the contested wilderness after interviewing the mourning locals, McCabe with a financial agenda in mind rather than genuine sympathy for those allegedly abducted by the natives, while Gary remains on guard to McCabe’s known deceptions, ready to oust the man from power at a moment’s notice.

Bullheaded in his ambitions but clear-minded in his assumptions, McCabe accurately predicts that most of those taken by the natives that they do find still alive are but a shell of their former beings. They scarcely resemble the people they once were, now more skittish and savage than the Comanche that hold them captive. Desperate to come out ahead on the expedition, the Marshal trades for the lives of a wild young man and a woman whom he can’t shake an attraction from. Blinded by grief, a mother and father accepts the man as their long missing son, but within Ford’s pessimistic frontier, compassion is awarded nothing but fear and violence, resulting in the mother’s blatant murder and the man’s subsequent hanging. McCabe on the other hand seems to be the only man moved by experience, falling in love with the rescued girl, abandoning his lawful post and riding off into the sunset atop a carriage with his lover in tow.

Seeing Stewart play against type as an out-and-out impetuous bastard is truly the film’s greatest asset. His McCabe carries a bountiful barrage of pointed one-liners and shockingly selfish admissions that carry the film on malevolent charisma alone, dragging the ugly fear laden narrative and misinterpretation of Native American culture up to bearable measures. Though natives are portrayed as fearsome warriors willing to rape and brainwash captured settlers, Ford ultimately humanizes them by foregrounding white man’s disdain for their traditional ways. McCabe, the cynical wet blanket of the west, is one of few who begins to see the truth between the warring cultures. The true enemy is fear and the potential loss of one’s own sense of being. At the time, Ford himself was personally dealing with this loss, and thus, found himself once again processing his emotions through the silver screen. The man was tight-lipped in self examination and increasingly cynical at the time, but remained strikingly sincere within his art.

Following their hefty Drums Along The Mohawk release, this bare-bones John Ford release by Twilight Time is a little stark in contrast, but the A/V presentation is easy on the eyes and well worth a few screenings. As the first domestic HD release of the film, the disc boasts of quite fine detail and a natural colour palette that depicts Ford’s picturesque landscapes with gusto. George Duning’s soundtrack comes amplified through a cleaned up mono track that sounds fine, but not exceptionally warm. The score can also be isolated in as a secondary track if you wish to listen that way. The disc is packaged in a standard Blu-ray case.

Theatrical Trailer
Riling up lovers of westerns through John Ford nostalgia and classic western visuals, this trailer lacks the visual vibrancy the cleaned up film boasts, but the old-school character introductions are kind of amazing. 2 min

Booklet
Featuring a set of stills and promotional artwork for the film, this brief little booklet contains an insightful essay on the film by Julie Kirgo.

A notch below top tier features, Two Rode Together remains at the darker end of the spectrum of John Ford’s work. Knee deep in misogyny and worldly pessimism, the film continues to be somewhat shocking in its nihilistic ethos, coming from the director who basically carved out the traditional western structure from the stone walls of Monument Valley itself. None-the-less, Ford’s grim late-period take packs its own charismatic wallop with Stewart and Widmark and a whole cast of Fordian regulars wading through the frame. Twilight Time have done a wonderful job with their new HD transfer of the film, but have passed this go round on the supplements front. Still, an easy recommendation for Ford fans.