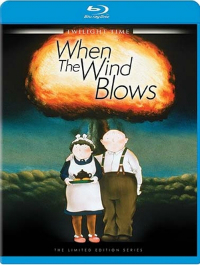 Born an American of Japanese decent and soon quarantined to the Tule Lake War Relocation Center in northern California after the bombing of Pearl Harbor as child, Jimmy Teru Murakami was permanently scarred by the experiences he and his family endured during the war. Decades later, after he had been nominated for a pair of Academy Awards for his shorts The Magic Pear Tree and The Snowman, as well as having collaborated with Roger Corman on the sci-fi feature Battle Beyond the Stars, Murakami confronted the realities of nuclear war by stretching the boundaries of traditional animation with his bracing blacker-than-black satirical comedy, When The Wind Blows.

Based on Raymond Briggs’ brutal graphic novel of the same name, the tale follows a senior couple who lived through World War II as part of the British army and fought the good fight, now elderly, living rurally and long out of the loop of real world politics. When the announcement that Britain is on the brink of nuclear war, James lackadaisically consults the government issued emergency directives for instruction on how to keep safe, while his wife Hilda seems more concerned with keeping the couch cushions clean and tea at the ready, not realizing that within minutes not only their nook of the world, but the entirety of England would be within the blast radius, either annihilated or hopelessly poisoned by the fallout.

As commentary on the amnesia of war and the stupidity of nuclear weapons, Murakami’s tale is a bracingly grim effort that carries its heavy subject matter with character based humor of sobering simpletonism. Yet, it’s the creative talents of the animators that manage to bring fragments of light into the film by inventively mixing live action sets with traditionally animated characters. Cameras pan and rotate around within the old couple’s house to wonderful effect, while several sequences – some fantastic daydreams, others horrifically realistic depictions of the oncoming nuclear annihilation – are animated in stylistically dichotomized, incredibly detailed tangents. As if drawn in the wind-whipped landscape itself, the sequence in which houses are levelled, trains are derailed and cars collide in rough slow motion is awe inspiring in its visual beauty and horrifying in its ability to conjure these implied memories of the destruction that took place in Hiroshima and Nagasaki.

Few films, animated or not, embrace the realities of war and dwell upon them with such a bleak perspective on the world, no matter how hard the truth of the subject matter may be. Watching the film, one can not help but be reminded of Isao Takahata’s similarly heart wrenching anti-war masterpiece, Grave of the Fireflies, but that film bears its moral brutality through throbbing emotional empathy rather than the somewhat chilly black comedy of Murakami’s feature. Though a work of harsh satirical brutality, When The Wind Blows is a British animated classic that stands upon its clear eyed creative originality as a means to remind us that war may not seem to effect us from its great distance, but it surely does, whether you choose to ignore the facts or not.

Generally the HD transfer produces a lovingly crisp picture, though there are moments of mild color fluctuation and dust speckles. Matching the picture quality, the DTS-HD stereo track pushes out an unremarkable, but generally clean sounding aural experience. The contributed David Bowie and Roger Waters tracks especially sound quite good. As is usual for Twilight Time, there is also an included audio track with the music and sound effects isolated from the dialogue. The disc itself comes in a standard Blu-ray case.

Jimmy Murakami: Non-Alien
A full length documentary directed by Irish filmmaker Sé Merry Doyle in which Murakami speaks on his experiences in the Tule Lake internment camp as a kid, revisiting the former camp decades later and ruminating on them through painting. The film is presented in crystal clear HD. 77 min

Audio Commentary with First Assistant Director Joe Fordham
In conversation with Fordham is Twilight Time’s resident film historian, Nick Redman. Together, they are a lively combo, producing lots of tangential stories about the production of the film, technical details and historical context.

The Wind and the Bomb – The Making of When the Wind Blows
A surprisingly rich making-of documentary that features various animators and delves into the multimedia aspects of the feature with stylistic flourishes that mirror the feature’s creative energy. 24 min

An Interview with Raymond Briggs
As the author of the graphic novel that the film is based on, Briggs talks about how the idea for the story came about, how the characters are based on his parents, and what his artist process is. 14 min

Booklet
As is usual for Twilight Time releases, an elegant and personal essay by Julie Kirgo features within this brief little packet, alongside a few promotional images of the film.

Sadly, Murakami passed on earlier this year at the age of 80 after a fruitful career of animated creativity. Though his later years were mostly spent in a studio painting his memories of internment as a child, the filmmaker will always be remembered for When The Wind Blows, a bleak, but lavishly animated marvel.