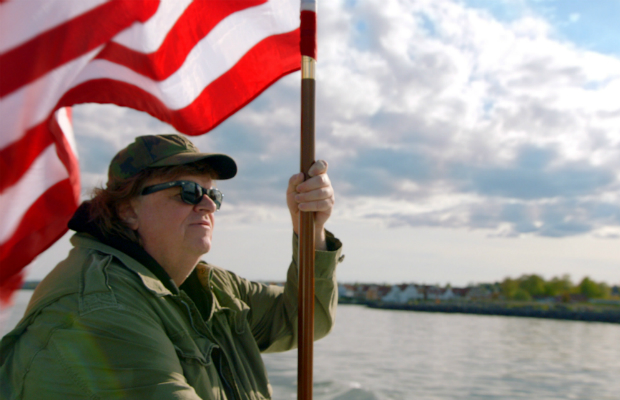 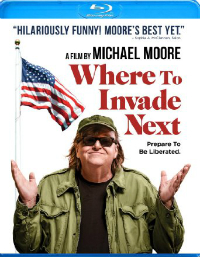 It’s been a relatively quiet six years since Michael Moore unleashed Capitalism: A Love Story back in 2009, but little did anyone know he’s been purposefully taking a low profile, travelling the world in relative secrecy in hopes of gleaning an array of cultural wisdom to impart upon his beloved American public. With welcome but uncharacteristic positivity, Where To Invade Next wryly asks the US military to acknowledge their history of failed attempts at infiltration and to stand aside, letting the docu-helmer take the lead instead, invading various counties in an attempt to patriotically capture cultural concepts that his home country would sorely benefit from. The film be his best since Palme d’Or winner Fahrenheit 9/11.

Armed with an American flag and his long time production crew, including producers Tia Lessin and Carl Deal (valiant filmmakers in their own right), Moore set off to countries like Italy, Tunisia, Iceland, France, Germany and beyond – nations no more perfect than his own, but who’ve adapted to various modern issues in their own unique ways. In Italy, a nation plagued by governmental corruption, he finds that factory workers are given no less than three weeks of vacation time a year to rest up and revive themselves from the stresses of work and two hour lunch breaks to go home and eat a healthy meal with family. Surprisingly, the CEO of a motorcycle production plant insists that the personal well being of his staff is pivotal to the ultimate profitability of the company, and he’s not the only Moore encounters laying claims like this.

In the film’s most liberally extreme but no less poignant, Moore continues on to rural France to eat gourmet meals with kids at school, who enjoy five course meals, including a cheese course, in a classroom setting. Their meals are not some kind of mystery slop served in a free-for-all hall, but distributed as a learning experience on preparation, health and manners. Even the town officials meet with the school chefs monthly to plan out healthy meal plans for the students. When shown photos of American school lunches sent from one of the film crew’s own children, both the chefs and kids were appropriately appalled.

With each new country visited, Moore adds another serious American issue to his stew of cheer inducing ideological discussion with his signature searing sense of humor, yet with a new sense of humility in his convictions. He touches on women’s rights in Tunisia, free college education in Slovenia and the institutionalized recognition and national forgiveness of past evils in Germany, and continues beyond. Rather than attacking and accusing as has been his MO for quite a while, Moore instead keeps it positive, highlighting why these foreign systems are working and then looking to his home country only in brief glances, keeping the compare and contrast structure to a minimum.

In a brief segment of personal reflection and genuine hopefulness, Moore is seen with a long time friend walking along the ruins of the Berlin wall where decades before they helped chisel holes between east and west in just a few quick days of international world change. Moore relays how those few days in which the impossible became reality transformed him into an eternal optimist, confident that these issues can and will be addressed with the swiftness with which the US has implemented gay marriage rights and so many other issues of injustice before it. While Where To Invade Next may be blindly hopeful and knowingly neglectful of countless other issues both within the countries it looks at and and surrounding the policies in place, it remains a gloriously buoyant piece of filmmaking with a patriotic heart of gold, guaranteed to strike the populous like a righteous reckoning beckoning for world change.

Though Anchor Bay’s bare-bones release doesn’t even bother packing a trailer, the film itself is visually pristine and aurally sound. No complaints on presentation, but the lack of extras is a missed opportunity to deepen the experience.

Love or hate the man, Michael Moore is man that brings legitimacy to the theatrical release of documentary film. Though he’s outspoken about what he deems to be aesthetically “theatrical” versus “small screen,” Moore’s Where To Invade Next doesn’t have a whole lot of visually interesting stuff going on, not necessarily warranting a big screen theatrical experience of his latest (though the communal environment does surely enhance the comedic moments). Thankfully, this Blu-ray release will do just fine for a home viewing of this important, funny, and yes, cinematic, reminder that the US is not the be-all, end-all of social development, but still sadly lingering behind nations around the world.

Continue Reading
Advertisement
You may also like...
Related Topics:Blu-ray Review, Michael Moore, Where To Invade Next