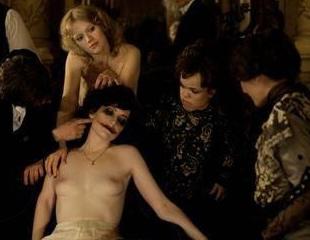 Cannes is going to have a stellar Main Comp (Pedro, Ramsey, Lars, Dardenne Bros., Kaurismaki) but there are still plenty of unexpected no-shows this year. Making Venice extremely happy we don’t find: Giorgos Lanthimos, Marjane Satrapi & Vincent Paronnaud, Aleksandr Sokurov, Christophe Honoré, Lou Ye, Pen-ek Ratanaruang and Brillante Mendoza. At the top of the list for surprise inclusions we have Camera D’or nominee in Julia Leigh’s Sleeping Beauty – (see the Eyes Wide Shut-like trailer here) I was expecting this to be the highlight for the Un Certain Regard section, but I guess this now means her first film is an extremely strong entry from Australia. Despite showing Tiresia in the Main Comp several years ago, I was thinking Bertrand Bonello’s L’apollonide (Souvenirs de la maison close) (picture above) would be relegated to the UCR category – which isn’t the case.

The same can be said about Radu Mihaileanu’s La source des femmes — the filmmaker has disappointed time and time again that we tend to not even want to mention him when discussing the Romanian New Wave. Maïwenn’s third film Polisse was being mentioned in some circles — again her previous efforts didn’t exactly make this a logical selection. Takashi Miike’s Ishimei (Hari-Kiri: Death of a Samurai) would normally have been thought of as an OOC title and the same could be said about Nicolas Winding Refn’s Drive — which comes out a full 4 months before it’s theatrical release and is a huge surprise for us but not for Screen Daily who called it months ago. We now understand why Joseph Cedar’s Footnote skipped out on Berlin – because it got a nicer invite from this fest. Alain Cavalier’s was in the UCR a couple of years back with Irène, him receiving a Min Comp slot for his comedy titled Pater (starring Vincent Lindon) is a huge head-scratcher. And Austria’s Markus Schleinzer is best known a casting director more recently for The Robber, Women Without Men and Palme winning The White Ribbon will show up with Michael (I imagine this is his directorial debut). Here is the complete list of 19 selections, we expect a possible add-on in the coming weeks.: