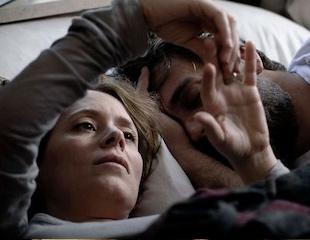 At the top of the year, I posted a list of my 5 most anticipated films of 2011. Number one on that list was Footnote, by Joseph Cedar (Oscar nominated Beaufort). The film was set to be released in Israel in March (presumably after a Berlin premiere), but it was pushed back to June. Everyone thought that the film wasn’t ready, but apparently the producers and the distributers knew something we didn’t: The film was admitted to the main competition in the most prestigious Film Festival in the world, in Cannes.

In recent weeks, plenty of media has been released in the form of three teaser trailers 1, 2 and 3) and a pair of posters with a bearded almost unrecognizable man is Late Marriage‘s Lior Ashkenazi. The story revolves around two professors competing each other for a prestigious award. The two are also father and son. Joseph Cedar is now officially among a select club — standing shoulder to shoulder with the likes of Pedro Almodovar and Lars Von Trier in the main competition of the greatest film festival in the world. And that’s just the beginning.