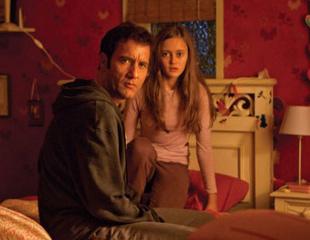 Juan Carlos Fresnadillo’s (“Intacto”,”28 Weeks Later”) second English language film will receive some home turf love as Intruders was selected as the opening gala film for the 59th edition of the San Sebastian Film Festival. The psychological thriller tells the parallel tale of two families whose lives are thrown off track by menacing apparitions: in Spain, a mother protects her son from a faceless stranger; meanwhile, in the UK, a young girl has terrifying dreams of Hollowface, a demon who becomes a real danger to the girl and her family. According to Fresnadillo, the film “reflects my love of the darkest visual universe, of the demons buried in our unconscious”. The Apaches Entertainment, Antena 3 Films and Universal Pictures co-production stars Clive Owen, Carice Van Houten, Pilar López De Ayala, Daniel Brühl and Kerry Fox from “Shallow Grave” fame. Also on tap for the festival are a handful of titles that will be showing at the recently announced Venice and Toronto Film Festivals. Here’s a peek:

Terence Davies with “THE DEEP BLUE SEA”: Starring Rachel Weisz, Tom Hiddleston and Simon Russell Beale, this adaptation of a play of the same name by Terence Rattigen is a chamber piece focusing on the emotional turmoil of a married woman who falls in love with another man.

Hirokazu Kore-Eda with “KISEKI (I Wish)”: tells the tale of a 12 year-old boy with one big dream in life: to be reunited with his elder brother, who has been living kilometres away since their parents’ divorce.

Arturo Ripstein with “LAS RAZONES DEL CORAZÓN (The Reasons of the Heart)”: who this time round brings us a free and personal adaptation of the last chapters of Gustave Flaubert’s novel Madame Bovary.

Sarah Polley with “TAKE THIS WALTZ”: The much beloved actress and director by spanish audiences due to her successful collaborations with Spaniard Isabel Coixet (“My Life Without Me”) now brings us a romantic drama starring a young woman struggling with conflicting emotions, starring Michelle Williams and Seth Rogen.

July Delpy with “LE SKYLAB” : a nostalgic comedy on a family reunion set in the 70s.

Wang Xiaoshuai with “11 FLOWERS”: describing the turbulent period before Mao Tse-Tung’s death seen through the eyes of a boy.

Mathieu Demy with “AMERICANO”: starring are Salma Hayek, Geraldine Chaplin and Chiara Mastroianni. The movie narrates the Mexican adventures of a young Frenchman on the trail of a mysterious woman who was a friend of his dead mother.

Ana Katz with “Los MARZIANO (The Marziano’s Family)”: a bittersweet family comedy about two long-estranged brothers and the tense friction arising between them when they’re forced together for a family celebration.

João Canijo with “SANGUE DO MEU SANGUE (Blood of my Blood)”: a Portuguese production which is an intense family melodrama set in the outskirts of Lisbon.

Filippos Tsitos with “ADIKOS KOSMOS (Unfair World)”: a surprising dramatic comedy on the strange goings on of a police officer obsessed by making the world a fairer place.

Björn Runge with “HAPPY END”: a Swedish production on the psychological and physical abuse of women in today’s society.

Toronto’s Lightbox Gets Real With Italians Not Named Fellini, Too
Review: Page One: Inside the New York Times
Advertisement
Advertisement