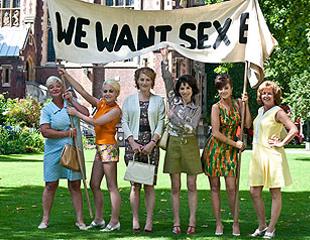 Sony Pictures Classics have pre-emptively picked up the rights to Made in Dagenham, Nigel Cole’s foray into the women’s movement in the heyday of 1968 – a Norma Rae or North Country type project. Formerly going by the more poignant, catchier title of We Want Sex, the project is destined for multiple film festival appearances and a release in the Fall, but most likely SPC will wait until Cannes buying is completed before attaching a date to the progressive, fact-based story.

Scripted by Billy Ivory, this is about the 1968 strike at the Ford Dagenham car plant when 850 female workers walked out in protest against sexual discrimination in their job performance evaluations. Their actions gave a huge boost to the women’s rights movement in the country and helped bring about equal pay for women in the workplace. During the protest, the strike committee was invited to tea by Barbara Castle, employment secretary in then-prime minister Harold Wilson’s Labour government. It was during that meeting that the strikers raised the issue of equal pay for the first time.

The former title is a reference to a famous banner carried by the women during one march proclaiming “We Want Sex Equality.” It was only later that they realized the last word had gone missing.

Nigel Cole’s more recent credits include Calendar Girls and A Lot Like Love.