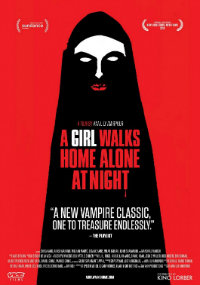 Described as an Iranian vampire film with all its characters speaking Farsi, yet filmed in California and set in the fictional locale of Bad City, there is an enigmatic, surreal aura to Ana Lily Amirpour’s exciting debut, A Girl Walks Home Alone at Night. An exploration of loneliness utilizing a set of nighttime creatures while evoking nostalgic cinematic traditions of the film noir and the adolescent rebel, Amirpour’s ambient film is startling in its rendering of expressive black and white cinematography in a film whose themes and sound designs recall the alternate universes of David Lynch.

Living at home with his junkie father (Marshall Manesh), Arash (Arash Marandi) is forced to give up the car he’s finally paid off to Saeed (Dominic Rains), the dealer and pimp to whom Arash’s father owes a large sum of money. Saeed also collects money from his streetwalking employee, Atti (Mozhan Marno), who he treats miserably. Abusing the prostitute, he is observed by a lone young girl (Sheila Vand), who places herself in his orbit in order to receive an invite into his home.

Meanwhile, in a bid to barter for the return of his car, Arash steals some items from a rich client, and visits Saaed at home. He finds the pimp dead, with the bloodstained girl exiting his home. Happy to be able to reclaim his car, as well as a briefcase of goods from Saeed’s that he can now sell, Arash runs into the girl once more, and they share a night of mutual attraction.

A drag queen swirls around with a balloon, evoking, perhaps, Dean Stockwell’s Roy Orbison rendition in Blue Velvet. It’s one of several notable moments in Girl that seems to reference parallels to Lynchian’s otherworld universes, the stark expressionism and black pools of industrial sound design also recalling Eraserhead. But Amirpour has concocted something quite original and unique of her own making. Basically, it’s a love story about two lonely souls coming together amid drowned out suburban decay, streets littered with pimps, prostitutes and struggling addicts.

Neither the titular girl nor her eventual love interest, Arash, is doing anything to better the environment, as they’re also pawns adrift in their own dreary landscape. Sheila Vand sometimes recalls a young Winona Ryder when cloaked in her mascara and hijab, a Goth girl prototype whose only joys are found in her eclectic (some might even say hipster-ish) musical selections. As Arash, relative newcomer Arash Marandi recalls a young Tim Curry styled as James Dean. “Those sad songs sure hit the spot,” he observes after a strangely romantic rendezvous with his new love interest shortly after he pierces her ears with a safety pin so that she may wear his gift of stolen earrings.

As arresting as these two are, culminating in a stunningly rendered moment within the Girl’s bedroom, music blaring, as she decides to listen to his beating heart rather than sink her teeth in his bared neck, Amirpour gets equal mileage from Atti, the prostitute played by Mozhan Marno, an actress many should recognize as the title character from the punishing The Stoning of Soraya M. (2009) as well as the Netflix series “House of Cards.” Here, she’s like a graceful femme fatale transported from the 1950s, a fallen, melancholy woman, whose plight runs parallel to that of the lonely vampire down the way and the unwanted feline no one wants to care for any longer.

More of a feeling and a mood than a definitive story, A Girl Walks Home Alone at Night belongs on a shortlist of modern and effective vampire films, evoking the trials and tribulations of the eternal creatures of the night, beings adrift that no longer remember what it is to want.