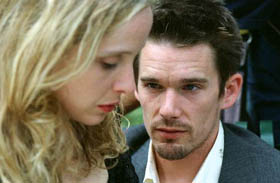 In theory, high-school reunions sound like a good idea, but then again, some good memories should remain untouched. Apparently, â€œnot-soâ€ is the case for Richard Linklaterâ€™s second volume. Spawned by a reunion on the set of Waking Life, Linklater and his two protagonistâ€™s bring homage to the low-key 1995 gem Before Sunrises. Linklaterâ€™s sequel is far from sacrilegious, rather than nullify the positive, sweet and simple experience of Gen-X romance â€“ it actually succeeds in making the first film one increment better.

In what may hopefully gear up as a fictional equivalent to the Seven-up series, Linklater and actors/co-writers Ethan Hawke and Julie Delpy revisit their characters – a full 9 years after the beautifully sewn together 14-hour romance. Sunset starts by posing the one burning question â€“ if they meet up 6 months later? Filmed in real-time, this is an 80-minute conversation that builds itself slowly, first starting off by shuffling through the interpretations of that one day in Vienna and what it meant to them several years down the road. Here, Linklater effectively erects a new story arc, with the landscape to match and the charm of mid-day Paris pervading in the background and foreground. Comprised of really long takes — where cigarettes actually get smoked down to the filter and where bateau mouche ride lasts a million times longer than a what a normal film would allow, this sees Jesse and Celineâ€™s second chance encounter, in a more complex, grown-up terrain.

While the trajectory of walking, talking, romancing within a fertile European setting isnâ€™t much of a thematic and visual stretch from its Eurail-pass predecessor, Before Sunset still manages to set itself apart from many the romantic films that falter from the conceptualization stage. The most stunning aspect apart from rich character portrayals is the range of emotionally-driven dialogue; even the odd uncomfortable silences seem authentically inserted in the text. If actor Hawke and Delpy look comfortable in their respective roles, itâ€™s perhaps because it mirrors a certain reality in their lives. Delpy brings her soft singing talents to the table and Hawke brings miscellany of his own public martial problems into the film text. It makes for complex, imperfect, authentically humble characterizations. Linklater adopts an interesting use of original footage â€“ he inserts it like mini flashes reminding his audience of pivotal pieces that are within the pages of Jesseâ€™s famous novel.

True to his style, this is a dialogue-driven track, Linklater follows his twosome with a Slacker-like discourse, – the only eruptions being a passing jogger or a â€œmerciâ€ to a waitress. Perhaps some might find that there is too much talk- but it only makes sense when there so much to catch up with and subtly added to the verbal discourse is an attraction, – a yearning that gets reintroduced and is witnessed in two shots that see each character luring in for a touch while the other is unaware. Linklaterâ€™s love story is peculiar in the sense that this is a non-sexual romance that builds up from one act to the next, providing one of the yearâ€™s best screen romances. With the same magic, same realism without pretension and an ambiguously yummy conclusion as found in the first film.

With clever writing that is smart and real, with endearing characters and a great chemistry between actors — this end product is the sort of screen romance that is rarely emulated in modern cinema. With Before Sunset Linklater proves that is at the top of his game and Warner Independent Pictures couldnâ€™t have chosen a better film for their new division of Indie flicks. Iâ€™d gladly like to revisit with this guys in a sequel to the sequel in ten years time.