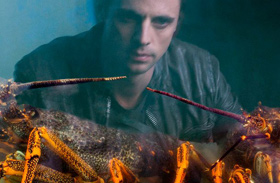 Like its shattered protagonist, Burning Man‘s narrative arrives in a series of vibrant and intense flourishes trying recklessly to place the images into some form of understanding. Slow motion car accidents, occasional skin exposure, lots of shouting accompanied by tears, plenty of moments with obvious impact are presented, but no context. That arrives in carefully mapped out bits and pieces to provide an excellently executed emotional punch to the gut that while not being completely autobiographical, obviously bares authenticity from the heart and soul of writer/director Jonathan Leplitzky.

We are introduced to Tom (Matthew Goode) as a successful chef, but a man trying to fill a very dark void. His short fuse and spitfire tongue can’t seem to be tamed, and hookers just don’t seem to be doing the trick in bed. Soon we find that he has an 8-year-old son named Oscar (Jack Heanly), who has picked up some of his father’s favorite words. At his birthday party after an accident involving a cake, Tom loses all control and finds himself in jail. As he hits rock bottom, we start to find out how he arrived there.

His gorgeous and loving wife (Bojana Novakovic), whom he lived every waking moment for while she was alive, has just recently passed after losing a hard fought battle with cancer. He is left wondering what point in living remains. Now, the story, when described in such simple and concise terms, seems a bit stale to say the least, and painfully generic at worst, but through his unconventional storytelling structure and absolutely sensational cinematography by Garry Phillips, Leplitzky avoids the well worn path of mediocrity.

Though the film centers around impending death and the unthinkable reparation process that occurs after a loved one’s passing, the film is really about life and the passion for it. From the outset, the frame is filled with mouth watering food, our life blood and a definite source of continuous pleasure. Tom is constantly cooking it, buying it, talking about it, and in one instance, getting pummeled by it. More directly, the creation of life and the extreme sensuality captured on screen between Goode and Novakovic makes it that much harder to bare the films final quarter. There is also a profound sense of compassion within the often humorous father-son relationship that is slowly decoded. Heanly’s young talents are aplenty and showcased throughout, but it is Goode’s commanding top shelf performance that brings this film above and beyond your run of the mill terminal illness dramas. Outside of a few title inspiring heavy handed metaphors, and obvious Malick shadow shot ripoffs, Burning Man is a truly a heartbreaking film of love, commitment, loss and accedence.