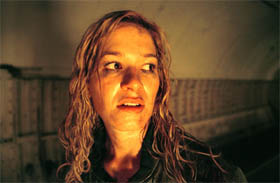 As recent headlines have demonstrated and the apocalyptic Hungarian film Kontroll has shown â€“ the subway system is apparently not the safest choices for transportation. Christopher Smithâ€™s directorial debut takes the monster-on-a-loose scenario to the London underground and makes for a bloodied, sometimes amusing and often times baffling battleground. Filled with the usual onslaught of devices and a cheeky storyline, Creep and its pile-up of horror events get filtered with comedic elements making this into a light-weight attempt at a full-out scare fest.

Sought for her running skills and perhaps not her thick German accent, actress Franka Potente brings her Run Lola Run skills to this basic run-and-be-chased horror formula. Funny characters to be met in the subway system are a plenty and many bad decisions from a woman in distress are too. While the first half is content with trying to chill with the usual lighting set-ups, creative make-up, loud screeches and p.o.v shots featuring a trapped and tired transit user, the other half surprisingly does a meet and greet with the creature â€“ a maimed soul whose origin gets explored and future career ambitions get displayed.

Certainly, for anyone who has lived in a metropolitan hub with a metro system can relate to the creepy poetry of this nocturnal world â€“ Smith makes fun use of labyrinth of locations â€“ but traveling shots that follow blood tracks and one too many introduction to the rat population and a bit too much time spent on telephones out of service shows a lack of insight to what makes true horror work. As a monster film â€“ the narrative seems content it not exploiting the fear elements but rather show what had been covered up it the first half â€“ becoming an exhibition on skin diseases.

Its understood that little logic will be dispersed in this sort of tale â€“ but you canâ€™t help but hope that instead of trying to open up several locked doors or trying to break an unbreakable chain that the protagonist might think of arming herself. Unfortunately, even the draw of a star in Potente does nothing more for the film than running and screaming. I wish thereâ€™d had been some elements that could have satisfied me as much as how the monster takes a pleasure in his killing spree â€“ but Creep simply runs through an inventory list of items that are geared towards gore and doesnâ€™t put too much thought into plot devices or original scare techniques.