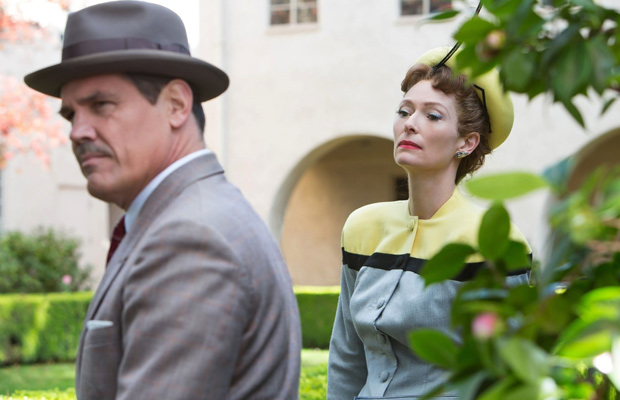 Sign of the Cross: The Coen Bros. Revisit the Backlot Desires of Hollywood’s Golden Era 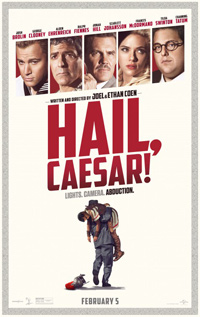 The Coen Bros., back with their first title since 2013’s Cannes darling Inside Llewyn Davis, step back to an even earlier era with Hail, Caesar!, a 1950s set allegory parallelizing movie studio heads with their supernatural equivalent—God. A rather stressful day unfolds on the backlot of Capitol Pictures, where a leading star currently set to film the final, important speech in a Biblical epic is kidnapped by a serene group of Communist writers. Meanwhile, the general cadre of hungry gossip columnists, disgruntled auteurs, and budding celebrities must be continuously juggled and groomed by the studio’s omnipotent figurehead. It’s an ideal environment for the duo, who seem to be consistently recapitulating earlier films and eras, like their rehash of True Grit (2010). There’s something about this latest effort which hints at the greatness of their 1991 title Barton Fink, but an increasing predilection for tangential flights of fancy also recalls the frenzied effort The Hudsucker Proxy (1994). At this point in their directorial careers, the brothers Coen have carte blanche in presenting their singular tastes, but this latest venture is .

Eddie Mannix (Josh Brolin) runs a streamlined motion picture studio, Capitol Pictures. But the future of the industry has become precarious with the rise of television and Mannix has recently become disillusioned with his profession. A staunch Catholic, he’s been headhunted for a lucrative contract with the military just as the country faces the possibility of nuclear war. As his deadline for a decision looms, Mannix is forced to put out a major fire at work when lead actor Baird Whitlock (George Clooney) is kidnapped for ransom right before completing his final monologue for the studio’s most expensive production of the year, Hail, Caesar! A Story of the Christ. With twin gossip columnists breathing down his neck for a scoop (Tilda Swinton), Mannix must also contend with shaping his new matinee star (Alden Ehrenreich) into a likeable romantic lead and saving a starlet (Scarlet Johansson) from tabloid fodder.

Each of these personalities is a rough composite of an actual somebody from the era, just as Hail, Caesar! is clearly a riff on the glut of Biblical epics of the period, with studios queasily beginning to portray Christ in the flesh (previously a blasphemous act). Today’s topical issues concerning Hollywood’s whitewashing of these stories (Exodus and Gods of Egypt, in recent memory) was not the topic of conversation, as evidenced in one of the film’s best sequences where a group of religious leaders are consulted about the ‘accuracy’ of the studio’s endeavor. Josh Brolin is rather charming as Mannix, a composite of MGM VP Eddie Mannix and head of publicity, Howard Strickland. Slowly, Mannix begins to take on the aspects of a Christ-like figure, a sort of martyrdom considering his sacrifices are what allow his section of the industry to flourish.

As the bronzed, kidnapped star, Clooney takes on the presence of a Tyrone Power or perhaps Victor Mature a la Samson and Delilah (1949), but he’s probably the least enigmatic presence. Supporting players with less substantial screen time, such as Scarlett Johansson in another scuzzy bombshell turn (aping Loretta Young), Tilda Swinton as a pair of viper gossip columnists (a wicked ode to names like Hedda Hopper and Louella Parsons), and Alden Ehrenreich as a James Dean-like budding matinee idol nab the film’s most comedic moments (including a marvelous exchange featuring Ralph Fiennes’s as closeted studio director, Laurence Laurentz).

Channing Tatum gets to be a Gene Kelly type in a playful tap dancing sequence, performing “No Dames,” a parody of thinly veiled homosexuality, rivaling the famed gymnasium sequence where Jane Russell is ignored by a bunch of gym rats in Gentleman Prefer Blondes (1953). Frances McDormand also gets her own memorable gag as a crusty editor.

But Hail, Caesar! loses a bit of steam by its closing act, leaving behind all the frantic wheelings and dealings of those circling the studio carrion to focus on the troubling business of capitalism vs. communism in pre-HUAC coded language, which only allows the Coen Bros to sidestep the messy reality the Hollywood studio era would eventually become. Clearly, this flippant meta-analysis is aping 1959 epic Ben-Hur (of note, the added subtitle of “A Tale of the Christ” was part of the 1925 version of this film), but by this time, the Commie scare wouldn’t be so easily dismissed as it is here. But if you can ignore its obliviousness, Hail, Caesar! is a rag tag homage to a bygone era of not only religious rhetoric in the studio, but a golden age of film. As far as escapist fare goes, it’s a pleasant offering, particularly for audiences tuned into its plentiful cinematic references. However, if the Coens are aligning cinema with religion, portraying celebrity worship as a byproduct of the reverence once reserved only for those three Christian entities in the clouds, then its only success is portraying it as empty an altar as any other.