Living Through Oblivion: Safdie Bros. Lens Devastating Tale of Desperation and Depravity on the Streets of NYC 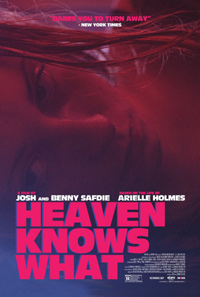 The story of how the directorial brothers Benny and Joshua Safdie found their muse and star, Arielle Holmes, for their latest feature seems like a shadowy tale from a gritty Craigslist missed connection. After Joshua and their producer Sebastian Bear-McClard spotted her on a subway platform while working undercover for research on an abandoned genre film, they approached her. A subsequent series of no call, no shows seemed like a dead end, but then Holmes reached out, admitting that she’d been homeless, out of touch and had recently attempted to take her own life and was just recently released from the hospital.

Having dropped out of school at 15 to become a homeless heroin junky running the mean streets of New York City, Holmes’s tale of depravity and desperation struck the Safdie’s with a fascinating idea. They suggested she write her life’s story and that they should collaborate on a film adaptation of what would become her memoir, ‘Mad Love in New York City’, if she would agreed to star as a fictionalized version of herself. Ferociously abrasive in its raw depiction of the despair and delusions that come with serious addiction and still fearlessly divine in its authentic austerity, Heaven Knows What is the take-no-prisoners style cinematic result.

Tracking her delirious emotional roller-coaster in scrutinizing Cassavetes-style vérité close ups, cinematographer Sean Price Williams proves to be the behind the scenes all star. His invasive lens weaves in on the faces of these tormented souls and around their unpredictable outbursts in lavishly loose long takes that accentuate the building tensions found within the frame. Locus on intimacy with an empathetic gaze, Williams explores the world-weariness within Harley’s eyes, a recurring rotation of terrified desperation and empty inebriation. No less important to the film’s aesthetic success is a remarkable soundtrack delicately layered with Isao Tomita’s electro renditions of famed Claude Debussy compositions. Imbuing the gritty urban landscape with a sense of sci-fi, Tomita’s pulsing synthesizers occasionally overtake all diegetic sound, amplifying the intensity of each increasingly frantic situation by aurally escaping to an otherworldly soundscape.

It’s no surprise then, that Heaven Knows What becomes a caustic experience in what it takes to escape the horrors of existence in a cyclic environment of addiction. In the Safdie’s smack-addled world of dependence and dereliction, love is as much an iconoclastic phenomenon as heroin use, both yielding cataclysmic results in the face of desperation. Taking inspiration from drug culture classics like Kids and The Panic in Needle Park while portraying something altogether perversely original in its depiction of corporate America as neglectful homeless shelter, the Safdie’s latest film embraces the consternation of living on the streets to portray these forgotten souls with an emotionally overwhelming sense of the real. Such an open-hearted, rawly bellicose realization of addiction has only been graced on celluloid but a handful of times, making the Safdie’s film a new exemplar of narcotic cinema for the ages.