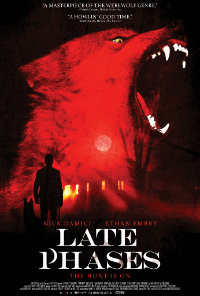 After the surprising critical success of his 2012 title Here Comes the Devil, Spanish director Adrian Garcia Bogliano makes his English language debut with Late Phases, a somewhat droll werewolf exercise paying heavy homage to several notable genre titles from the 1980s. Entertaining but never as funny or thrilling as this concoction sometimes promises, for those familiar with Bogliano’s earlier titles (this marks his eleventh feature, plus a handful of short films), it’s considerably polished in comparison even if it lacks the pizzazz that such a derivative subgenre requires.

A blind war veteran, Ambrose (Nick Damici) has been relocated to a quaint retirement community, deposited unceremoniously by his son (Ethan Embry). Ambrose chats with his friendly neighbor lady Delores (Karen Lynn Gorney), but she, along with his trusty canine, is ripped to shreds later that very night by a lycanthrope. The police are nonchalant about the matter, chalk it up to an animal attack, something that seems to happen quite often in the community. While a group of old biddies in the neighborhood find Ambrose off-putting, he ingratiates himself around town, for he is convinced that what attacked his dog and Delores had to be a werewolf. He hones in on the kindly but kind of strange priest, Father Roger (Tom Noonan), but though Ambrose has a heightened sense of sound and smell, he can’t quite sniff out the secret.

It often feels like Late Phases has intentions of making use of several motifs it toys with, namely its depiction of an easily targeted retirement community as a mere step away from the graveyard, at least as far as the lack of enthusiasm from the law enforcement community is concerned. And it’s with these supporting characters that Late Phases seems to have the most difficulty, a gaggle of old broads relayed as caricature (and headed up by the likes of Tina Louise and Rutanya Alda), cartoonish cops, and thinly drawn familial issues dying to be fleshed out. Bogliano snags some entertaining bits from the likes of Larry Fessenden and Tom Noonan, the initial suspect, whose conversations with Damici are among the film’s best moments. It’s here (along with the structure around the lycanthrope cycle) that Bogliano channels Silver Bullet most evidently, though a community of hairy creatures that look like denizens of The Dark Crystal’s orbit also strongly recalls 1981’s The Howling.

As the blind and bitter war veteran, Nick Damici, usually playing a notable supporting character in the films of Jim Mickle, owns Late Phases, gruffly admonishing all those around him, a man that closed himself off from the others long ago. There’s more of a backstory hinted at with his son, and having a recognizable name like Ethan Embry seems rather a waste, including an ending that shoots for the moon but lacks the flourish that one would assume Bogliano is intending.

Glimpsing the hairy werewolf early on, we wait the remainder of the film for the next full moon as Ambrose (a name that recalls Ambrose Bierce, who wrote some short stories about the unearthly creatures) prepares himself. While Late Phases features some inspired looking lycanthropes, the lack of tension puts one in mind of B-grade genre fare (like that Mariel Hemingway werewolf movie, Bad Moon, 1996), and retains interest mostly for how much it will remind you of the films its clearly derived from.