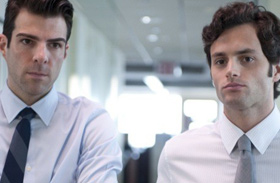 If one were to take an epidemic film (i.e., Contagion, 2011) and turn it into a stage play from the point of view of the virus, set it entirely in one host cell the viruses are about infect, understanding this would infect every cell of the entire organism said cell resides in, then you would have something akin to the debut of J.C. Candorâ€™s Margin Call, which details an investment firmâ€™s dirty deeds during the first 24 hours of the 2008 financial crisis. The result eschews traditional thrills for a sobering, methodical portrait of corporate carelessness. Packaged as a Hollywood thriller, the film is more akin to the distantly icy coiffed women and fiscally conservative stylized men on FOX news berating ideas of wealth redistribution or complaining about the possibility of the wealthier populous shouldering the responsibility of supporting the entire country.

On the eve of the financial crisis, an investment firm in the middle of downsizing lets go of the head of risk management (Stanley Tucci), who had currently been doing some research concerning a formula that measures profitability (the nature of the formula and what it really measures is spelled out on more than one occasion, even as a â€œplain Englishâ€ scenario, but it never seems quite clear enough). As he is escorted out of the building, he passes his findings to a junior staff member (Zachary Quinto), a young man who used to actually be a rocket scientist, and who, within hours, is able to plug in information his boss had missed, unlocking information that points to impending ruin for the firm. This information is immediately hiked through the chain of command (Paul Bettany) to the trading floor boss (Kevin Spacey) to a financial officer (Demi Moore) to the disinterested and reptilian CEO (Jeremy Irons). What results is an all night emergency meeting where individual futures are ruined and the herald of our current financial crisis is born.

With so many secretive, tight lipped meetings circulating around dollar signs and figures of large sums of money, Chandor manages to induce a certain amount of unease and dread in the initial proceedings. But what begins like a prophetic Wall Street set John Grisham novel quickly becomes a stalemate of soliloquies.

If no one seems nice, itâ€™s because no one is, pointing to the definite conclusion that innate, human selfishness and greed is at the root of our entire crisis. Certain players get bits of humanizing moments, like Kevin Spacey caring for his dying dog, but anyone who can afford to spend a thousand dollars a day on keeping dog alive is also hard pressed to find any empathy from an audience that will consist mainly of â€œnormalâ€ people. While thereâ€™s a certain amount of gleeful bitchiness and finger-pointing about the cluelessness of executives (yes, Jeremy Irons asks to be told â€œin plain Englishâ€ like a dog or a child and Kevin Spacey is heard to utter, â€œyou know I donâ€™t know how to read those graphsâ€) itâ€™s really just preaching to the choir.

Surely, in 2011, weâ€™re all aware that those in government and on Wall Street are indeed clueless. As Irons puts it, â€œItâ€™s not my brains that got me here.â€ While Margin Call is certainly a competent film centered around recent and compelling current events, it canâ€™t manage to be more than just a stalled spectacle set in a soul crushing office environment.