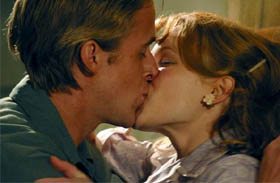 Third time is a charm for Nicolas Sparks novel to big screen adaptation.

A sappy romance sprung from the pages from the same hand that wrote the novels of Message in Bottle and A Walk to remember gets an authentic treatment thanks to director of Sheâ€™s So Lovely careful hand. Though this is a far stretch from his indie roots, auteur Nick Cassavetes demonstrates that a melodramatic period piece doesnâ€™t have to be a bore â€“- that it can somehow come across as a genuine account even with an ineffective tearjerker subtext in the way of things.

Offered in a series of especially long flashback sequences, The Notebook reads out like any film loaded in hallmark card moments. Narrated by, and referenced back to a couple of senior citizens in James Garner (Murphy’s Romance) and Gena Rowlands (A Woman Under the Influence ) this is about a summer romance which despite the usual antagonizing forces try and separate impassioned lovers develops into a relationship that stood the test of time. In its clearly predictable format, this sentimental tale throws in a minor WWII aftermath, a dream house built by hand, unopened love letters and a dreamy rowboat experience â€“ it makes for a dramatic package that reads out like the miniature delights found in The English Patient. Young Canadian actors Ryan Gosling (The United States of Leland) and Rachel McAdams (Mean Girls) star as the young man is a 40-cent an hour country worker and the cherry-color dressed young girl from a wealthy family. The flash-forwards into alzheimer’s territory is seriously cheesy and unrealistic and every time the film reverts to it it manages to break the flow of he film but doesnâ€™t bring the total effort down — the major focus of the film which is left to the beautifully detailed undying love story somewhere in the 40â€™s is perhaps this yearâ€™s best on-screen romance.

With a Jennifer Garner appeal, McAdams charms the screen. With Gosling, the two illuminate the screen with their genuine performances, aided by a dialogue which compliments the two who offer believably true expressions. Cinematographer Robert Fraisse does a great job here at framing the pair and his exterior shots gives the film a romantic canvas, which are finely cut by Alan Heim. While the roles are ultra-developed, they are none the less charming.

Cassavetes fourth film – also a drama, is his most complete production, while The Notebook certainly feels Hollywoodishly sentimental it still manages to work its charm.