Down and Out: Solanas’ Latest Lost in its Own Concept 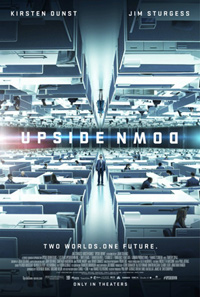 For his latest film Upside Down, a French Canadian production from director Juan Diego Solanas, star crossed lovers are separated by not only bitterly enforced classist social mores, but the forces of gravity itself. A love story folded into high concept science fiction, Solanas attempts to create a brave new universe of diametrically opposed planes of existence, like if a bridge was built between Earth I and Earth II in Another Earth (2011) and humans reverted/continued to engage in savage tactics of colonization and segregation. Unfortunately, there’s absolutely no character development, tossing a poorly realized and mundane love story at us that’s furthered only by its nicely varnished visuals.

Adam (Jim Sturgess) and Eden (Kirsten Dunst) are in love, which poses a significant problem for them because they live in a world that consists of dual gravity, with Adam living in the poor, exploited region Down Below while Eden resides in Up. While the beings and items of each world must abide by the rules of gravity from whence they originate, the two of them meet on mountain tops that nearly touch between the two worlds. One day, some vicious and cruel hunters spy the two lovers during a rendezvous, leading to what seems a lasting separation, and Adam is unsure if Eden survived the conflict. A decade passes, and Adam sees Eden on television, now working at Trans World, a large columnar like building that serves as the only place connecting the two worlds (it’s also the conduit through which the Upper Realm steals electricity and goods from Down Below). Securing a position at Trans World by hawking his anti-aging cream, a product he’s currently developing (using secret pink bees that his aunt introduced him to as a child), Adam attempts to reunite with Eden, who at first doesn’t recognize him due to the amnesia she suffered on account of falling during the last time they met. But once she realizes who he is, how will their love survive?

A lot of Upside Down feels lifted from other tales, like bees and beauty jelly from The Wasp Woman (1959) or the terrifyingly sterile office spaces of Trans World that looks like a mirrored image lifted from The Trial (1962), or the unfortunate naming of its leads as Adam and Eden. Do we even need to mention that it’s also merely a rehashed version of girl meets boy from wrong side of the tracks, more succinctly crooned to us in Billy Joel’s “Uptown Girl” then it has hammered out here? While it features some dazzling visuals, we’re never quite invested in the generic romance of the two leads, isolated mostly by vaguely determined social customs.

Solanas’ screenplay also features some significant errors in that it doesn’t always play by its own rules (such as, how is there night and day on both worlds if they aren’t rotating?) and worse, terrible dialogue, including heavily used omniscient narration by Sturgess, which is both grating and cornball. While Dunst is rather underwhelming here, Sturgess tries desperately to rely on acting cutesy and charming, his performance a forced and disingenuous portrayal of love. Instead, Upside Down belongs in a league of films that would have made better music videos than fully fleshed out film features, as there’s nothing to keep us clocked in with Adam and Eden, who finally find a convenient heteronormative solution to their perilous romance.