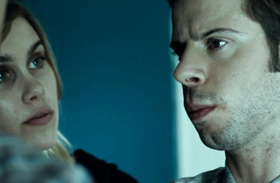 Clay Lifordâ€™s third feature film, Wuss, is another cinematic exploration of paralyzed masculinity, its passive protagonist not far removed from the neutered man-children of sub-standard fare like Horrible Bosses, seemingly unable to make informed, adult decisions. While Lifordâ€™s film mostly succeeds in presenting us with a sad-sack weakling we actually muster some empathy towards, the nagging tug of apathy for both character and plot development never quite dissipates.

Opening in the midst of a high school class reunion, Mitch (Nate Rubin) exchanges derisive comments and awkwardly flirts with a female classmate, one who is only at the reunion because it happened to coincide with a visit to her parents. We learn quickly that Mitch is a writer, only he hasnâ€™t yet written anything or actually even moved out of his motherâ€™s home. In fact, Mitch is actually a teacher at the very same high school, only recently having acquired a full time position as a last minute replacement for a staff memberâ€™s unmitigated absence. Daringly, Mitch attempts to flirtatiously show his female friend the classroom he teaches, which is against the rules during after school hours. Caught red-handed by the Assistant Principal (Alex Karpovsky), Mitch is chastised and denigrated by his superior as a â€œlittle bitch.â€ And so begins a countless number of examples where Mitch is teased, abused, and beaten down, numbly navigating his way through each situation with a large, wide-eyed stare like a small boy trapped in some nightmare existence. From his friends and co-workers, with whom he enjoys playing Dungeons and Dragons, to his viciously bitchy sister (Jennifer Snipes), who also lives at home with mom, no one has a nice thing to say to Mitch. But when Mitch sends a threatening black student named Re-up out of his classroom for disruptive behavior, he begins to be beat on a regular basis by said students and friends. Afraid to call the police, a quiet, bright student named Maddie (Alicia Anthony) comes to his aid, a strange and disturbing family connection making the other students fear her. As Mitch and Maddie begin to frequently interact as they plot to take revenge on Re-Up, their relationship becomes increasingly inappropriate.

Wuss begins as a daringly funny black comedy about arrested development, stunted masculinity, and the destructively useless education system employed in American schools. But as Mitch makes more and more unsound decisions, the films develops into a nonsensical exercise, unspooling like some dark dream in an alternate universe. At the bottom line, itâ€™s hard to care about someone that has as little common sense as someone like Mitch, never mind the perpetual victimhood martyrdom. But the end result of the film is rather a meandering narrative that fizzles out with a squeak, signaling to the audience that because of some nasty turn of events, Mitch will succeed in learning to be assertive and perhaps make better choices.

Reducing itself to a trite conclusion, the film also gives us a misplaced monologue from Mitchâ€™s mother, expounding on how she always thought he would have done better for himself as he has talent as a writer, the sort of speech that any cognizant mother would have given her son years prior, rather than incessantly shaking her head and ignoring him as he walks around with black eyes and mottled face. While Lifordâ€™s latest isnâ€™t a bad film (and it does contain some genuinely great moments, such as Mitch confronting Re-Upâ€™s mother at their home) it fails at being either memorable or noteworthy, hindered most by a script that seems to flounder with direction. While the performances of Nate Rubin and Alicia Anthony are quite good, the rest of the cast feel like caricatures, never fully developed or realized. With a running time of 107 minutes, Wuss manages to feel much longer than it really is, and not having the guts to say anything with any real conviction.