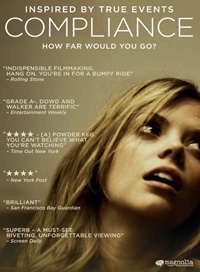 Inciting both outrage from audience members and an outpouring of critical praise at Sundance last year, Craig Zobel’s Compliance is an audacious and shocking depiction of submission to figures of authority under duress. Inspired by the true events that occurred at fast food joints across the US and the famed obedience experiments of Stanley Milgram that took place during the 1960s, the film chronicles a single day in which a faux police officer phones a fast food manager and convinces her that a young, female employee has stolen money from a customer and needs to questioned and held until the authorities arrive, but as common sense subsides, the situation goes way further than that.

Held down by a trio of exquisite performances by Ann Dowd (as Sandra, the restaurant manager), Dreama Walker (as Becky, the accused employee), and Great World of Sound‘s Pat Healy (as the silver tongued creeper, Officer Daniels), Zobel twists a lengthy multi-person phone conversation into a full body flex thriller that sustains the tension to near unbearable levels. Daniels says that Becky has stolen cash from the purse of a customer and Sandra has been instructed to interrogate, strip search and detain her until Daniels and his team can arrive. Though Sandra seems an adept, caring manager (Dowd holds a perfectly sympathetic charm), when under the thumb of authority, her own sense of judgment is all but abandoned. And the imprudence doesn’t stop at Sandra alone, but other subordinates and willing acquaintances that go along with the awkward long-distance bemusery.

With equivalence in quality, cinematographer Adam Stone (known for his work with Jeff Nichols on Take Shelter, Shotgun Stories and most recently, Mud) builds a house of cards out of the tension that swells in the enclosed back room of the restaurant. Stone and Zobel are careful to show just enough, in contorted bodies and unclean workstations, to imply what takes place in that space without actually displaying the grotesque acts forced upon Becky. Capping off the film’s chillingly poignant finale, one of the most intrepid single shots of the year peaks at the absurdity of the situation in pure time and distance. Laying underneath all of this is composer Heather McIntosh’s bold and eerie soundtrack that occasionally surges to the forefront for full emotional impact.

Zobel proves to have a masterful feel for the uncomfortable and a shrewd understanding of the word Compliance. His film is an ingenious and horrifying admonishment to the masses that we must remain skeptical, if not analytical in the face of perceived authority. We’d all like to believe if put in a situation like this, we’d realize the situation at hand and take action to extricate from it, but it’s events and films like this that remind us that we are biologically submissive beings. Scary.

Last year was a great year for Magnolia and with this release they are continuing down the right track. Adam Stone’s close quarters cinematography looks wonderful, the transfer sporting great detail bathed in brown tones that soak the entire film. The 5.1 soundtrack also is big and bold, especially when the music swells. For a film with little to no action, even the surrounds are implemented well, with subtle embellishments that add to the experience. The disc itself is housed in a standard DVD case.

Interview with Director Craig Zobel
Zobel astutely speaks about the inspiration for the film, which sparks from not only real life news stories, but Stanley Milgram’s obedience experiments as well. He also goes into detail about the production design, specifically the creation of a fake restaurant chain and shooting within confined spaces for nearly the entire film. 10 min

Behind the Scenes of ‘Compliance’
A throwaway EPK piece, Zobel and Dowd give quick intro to the film (almost the exact thing is also said in the above interview) and there are brief clips of scenes being filmed. Potential, wasted. 2 Min

AXS TV: A Look at ‘Compliance’
Another EPK bit with Zobel saying the same exact rundown that was said in the other pieces. Here there are even more clips from the film. Why include extras that almost take away from the package? 4 min

Theatrical Trailer
Featuring Heather McIntosh’s haunting string and xylophone composition, this is a superb trailer that captures the tension and tone of the film in a fraction of the running time.

Zobel’s feature is a squirm worthy thriller that questions our very nature with bold calculation. Rife with the downfalls of human subservience, Compliance is a luminous, pulsating Milgram experiment come to life, and you won’t be able to turn your gaze from the results.

Criterion Collection: World on a Wire [Blu-ray] | DVD Review
I Am Not A Hipster | Blu-ray Review
Advertisement
Advertisement