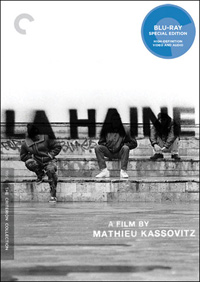 In 1995, Mathieu Kassovitz’s exceptional debut, La Haine, was a shocking realization of the unjust ghettoizing of immigrants taking place in France, and the violent abuse of power by police forces, but its surprising how relevant the subject remains today, even outside of French borders. Not only does it still carry cultural significance, but the film continues to awe with its striking black and white long takes, and bold encapsulation of what living in the public housing projects is like for people growing up in them. The film places us in the bombed out cities where people burned their own businesses in protest, and graffiti covered neighborhood playgrounds where teens stagnantly talk about nothing all day long. By getting to know the area, and its residents, Kassovitz was able to make an important film, with both political and technical merits that stand side by side with outstanding performances by Vincent Cassel, Hubert Koundé, and Saïd Taghmaoui.

Bound by the streets, Vinz (a Jew), Hubert (an African Frenchman), and Saïd (a French Arab) grew up living in the projects, not as best friends, but as close as one might get in such surroundings. A fellow resident has been killed in custody of the police, who were already in poor standing before the incident. Shortly thereafter, riots broke out, and amidst the chaos one officer lost his firearm (in France normal civilians don’t carry guns like we are allowed in the US). Vinz was the lucky hooligan who snatched it, and he wants revenge against the pigs who murdered his friend, but his quick temper gets he and his friends into trouble on more than one occasion. When the moment of truth arrives, his will is tested.

Giving nods to his biggest filmmaking influences throughout, Kassovitz’s script captured the dialog of the streets while making a major statement about the irresponsible police state, and the cultural segregation created by these public housing projects. With his carefully planned cinematic style, and the snappy dialog of his leading trio, the film feels very much like a politically charged Tarantino film. Characters speak at length about what seems completely irrelevant banter, but it is in the act of doing so itself that the film finds its power. They disclose the intricacies of their situation through distorted language, and are humbled by the clarity of those who lived before them. Unfortunately, it doesn’t matter because they can’t change the ghettos themselves without overwhelming community outcry, and violent protest.

Since the dawn of color film development, releasing a film in black and white has always been a risky proposition, and when it was proposed that La Haine be shot in b&w, the response was a stern no for a variety of reasons. So, the film was shot in color, but after some tests, was transferred onto a special b&w film where the beautiful grittiness of the picture was discovered. Pierre Aïm’s painstaking cinematography perfectly captured the decaying environment while letting most of the action play out in long walking takes, and complex reflected movements. Scene after scene, there are memorable moments that visually cement both the beauty and horror of the ghetto in your mind’s eye.

The Criterion name has come to be synonymous with quality, and La Haine‘s new Blu-ray release is yet another example of why that is. With a stunning, clean b&w transfer that possesses great detail, and appropriate contrast levels, the film looks wonderful. The HD-DTS 5.1 master audio track is also of top notch quality. Urban neighborhoods are recreated with lots of extraneous environmental texture coming through the surrounds at any given moment. Complimenting the beautiful A/V presentation, Criterion has jam packed the disc with complimentary supplements. The disc itself comes packaged in one of Criterion’s signature clear Blu-ray cases.

Audio Commentary with Mathieu Kassovitz
Though the track features Kassovitz alone, he keeps the track interesting, speaking at length on the political inspiration for the film. He also occasionally describes how some shots were developed. Once and awhile he starts to repeat himself, but for the most part this is a lively and informative listen.

Jodie Foster Introduction
Best watched after viewing the film, this shows Foster long-windily explaining why she fell in love with the film, how she got involved with the project, and why it still holds up today. She is obviously immensely proud of the picture, and is grateful to be one of the leading forces in its US distribution.

Ten Years of La Haine
This highly personal StudioCanal produced doc runs an hour and twenty minutes, and tells the story of the film’s origins all the way through to its controversial premiere at Cannes back in 1995. Told completely through black and white interviews, it features Kassovitz, Cassel, and Koundé, as well as producers Christophe Rossignon, and Alain Rocca.

Preparing For The Shoot
With home video quality footage, this 6 minute featurette contains footage of the small film crew when they moved into the public housing unit prior to the shoot. They lived there for months familiarizing themselves with the local residents, immersing themselves in the urban culture, and preparing for the shoot by becoming close friends in real life.

The Making Of A Scene
Featuring behind the scenes footage, this piece details the shooting of Vinz’s cop killing fantasy scene. There are also on the set interviews with Kassovitz intercut with the footage.

Deleted and Extended Scenes
There are collection of scenes that didn’t make the final cut included here, and since they were originally shot in color, they are presented here as such, and still have time coding embedded. Afterwords by Kassovitz are included for each.

Still Gallery
Within there is a collection of behind the scenes photos from the shoot with introductory blurbs for each. Some are quite comical, while others are telling of the relationships between the actors, and production crew.

Theatrical Trailers
There are two trailers included, both of which are brief, ominous pieces that give the feeling of something violent coming to a head. They aren’t presented in HD, filling only part of the screen instead.

Booklet
This included booklet contains a bunch of stills from the production. It also features two written pieces on the film, one by director Costa-Gavras, and another by film scholar Ginette Vincendeau. There are also detailed notes on the transfer found within.

For Vincent Cassel, this was a star making springboard, but sadly, as Kassovitz’s first feature, it seems to be the peak of Mathieu’s filmmaking career, with a string of horrid Hollywood films lining his oveure. That said, to his credit, La Haine remains an astounding debut with limitless watch-ability that works on a variety of different levels. Starkly funny, politically poignant, and extremely honest in its social portrayal, it endures as one of the greatest films of the 90s. Criterion’s Blu-ray treatment is, as expected, truly gracious, and comes highly recommended.