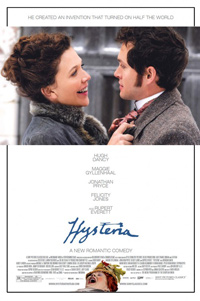 Opening with a title card announcing a cutesy wink to the audience that this is “really” based on a true story (as if the modern world has become so incredibly enlightened 130 years later in our progressive views on sexual pleasure), we’re dumped unceremoniously into the environment of the young Dr. Mortimer Granville (Hugh Dancy), an idealistic physician that is promptly fired by his current employer for strongly advocating the new germ theory (“It scares the patients.”) Stuck between jobs, he leans back on his benefactor. Orphaned as a youth, he was luckily taken in by the filthy rich Lord Edmund St. John-Smythe (Rupert Everett). While it’s hinted that St. John-Smythe may perhaps be somewhat of a sexual deviant (yes, that would mean homosexual in today’s world) his relationship with the wide-eyed Granville is simply platonic. Granville hits the jackpot when he stumbles upon the posh practice of Dr. Robert Dalrymple (Jonathan Pryce), who specializes in treating women with hysteria, something every rich housewife in England seems to suffer from. Dalyrmple hires the young man immediately, and before you know it, Granville is, in essence, fingering every rich housewife in London (that uterus slips out of place and needs to be popped back in, you know).

As delectably daring as this might sound, Wexler instead treats us to jejune flourishes, with Dancy getting hand cramps due to the high frequency of hysterical women and their daily treatments. After losing his position at Dalrymple’s clinic and endangering his engagement to the younger Dalrymple daughter (Felicity Jones), an icily rigid young lady, Dancy inadvertently sets his sights on the elder Dalrymple daughter, an outspoken Mother Theresa type named Charlotte (Maggie Gyllenhaal). Seen as the black sheep of the family, what with her extensive charity work single-handedly running a homeless shelter, scooping prostitutes off the streets and what not, a situation arises where she is incarcerated and she will either face jail time or be denounced as hysterical, which means being locked up in a sanitarium and having that pesky uterus ripped out. Will Dr. Granville follow his heart or his pocketbook?

There’s nothing innately wrong with melding genres or injecting a standard romantic subplot into a scenario as a sort of diving board into the subject matter, but the romantic machinations of Hysteria are so lazily written, so utterly cardboard and slapdash, and with such terrible attempts at comedic writing and even worse, clichéd dialogue to fill in all the empty spaces, the film represents all the wrong ways to do something. Sure, this is a film enjoyed by people that love when history is declawed, rewritten, made nice and comfortable. This is for people that would prefer the The Color Purple if it didn’t feature any real slavery, or Schindler’s List without any real gas chambers.

The complex and fascinating social circumstances that surrounded the creation of what has come to be known as the vibrator hardly gets the realism it’s due in this butchered history. When it comes down to Charlotte Dalrymple having her uterus removed based on one man’s diagnosis without an examination of her, a man who has previously, in every scene, denounced her as erratic and refused to help her, she is met with a crescendo erecting speech admiring her heretofore denounced outspokenness. Historically, most women in her shoes would have been butchered, lobotomized, locked up. Not so here. It’s true love. Let’s hope he never gets tired of her.

An overly insistent score laces every possible moment in whimsical sap, managing to drain any genuine feeling from transpiring in its wake. It’s not hard to see why an American actress like Maggie Gyllenhaal was attracted to the material, as the promise of something intriguing is there. To her credit, she gives the best performance, but just as we pity how her strong willed character is stuck in a strict man’s world, we pity the actress for being stuck in such a crap film. Poor Mr. Dancy fares worse because his character is even more ridiculously written. What producer Becker and director Wexler should have been smart enough to realize was that with their subject, they would have had to try hard to make a dull and dusty biopic. In a world where female pleasure on the silver screen still warrants an NC-17 rating, there’s an endless possibility to the statements they could have made with the subject matter. In fact, they only needed to tell the truth. As it stands, Hysteria is one more tedious romantic comedy, where we have to watch a smart woman succumb to some unbelievable romance with a clueless man. Thanks for putting everything right back where it belongs, Ms. Wexler.