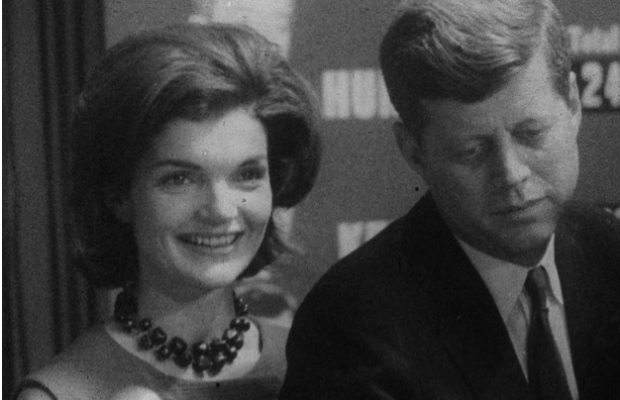 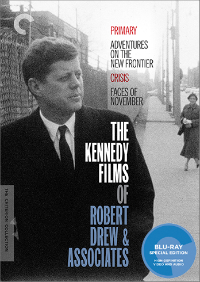 “It’s not an exaggeration to say that before Primary, documentary as we know it today – the art of candid observation – didn’t exist. Not the equipment, not the techniques, not the philosophy. The Drew team was making it up as they went along,” recounts doc programming powerhouse Thom Powers in his essay included within this lavish Criterion Collection release of The Kennedy Films of Robert Drew & Associates. He’s not wrong. Robert Drew and his ingenious, talented and forward thinking filmmaking crew of Richard Leacock, D.A. Pennebaker, Terence Macartney-Filgate, and Albert Maysles broke open the stuffy world of narrated documentaries and embarked on a new frontier of handheld, sync sound Direct Cinema, as they proudly branded it.

Lovingly (and enduringly) coined by the French New Wave critics at the time as cinéma vérité, this new form of filmmaking came to fruition after a half million dollar technological investment in Drew and his team by Time-Life to develop lightweight cameras and portable recording devices that would be used to create original content for the outlet. After having worked on various test projects, Drew had been searching for a worthy new subject and found himself quite interested in the upcoming presidential election in which John F. Kennedy was beginning to face off against senator Hubert Humphrey in the 1960 primaries. After successfully gaining access to their subjects, Drew’s team set off on the campaign trial with cameras in hand, taking in the experience of being in the midst of a rally, highlighting the work of being on the streets shaking hands with the public, and the exhaustion of traveling by car from one town to the next in hopes of garnering the endorsement of potential voters.

At the time, the film was formally radical , relying on experiential in-the-moment portrayals rather than oratorically based narrative storytelling, and thus, it wasn’t initially picked up by networks who weren’t sure of where, when or how to show it, thus Leacock set to cutting it down for an alternate version, half the length (included here for comparison). No matter, Drew and his crew had convinced Kennedy of the power of their aesthetic and they were equally adamant about continuing to film the newly elected president. Surprisingly, they were invited to shoot a day in the life portrait of the president for the resulting Adventures on the New Frontier which reuses some of Primary‘s footage while reverting back to voiceover narration rather than impressionistically showing. Drew wanted to show more, reveal what the job is really about, so when the Alabama Governor George Wallace decided to forbid racial integration at the University of Alabama in June of 1963, he found his perfect subject.

Miraculously granted access to the oval office, the homes of Robert F. Kennedy, then United States Attorney General, and even George Wallace, the Associates (five camera crews in total) hit the ground running. No private film crew has ever been given as much free reign in the White House since. What they managed to capture on film, from every key location, from multiple perspectives and edited to show the pressure mounting from all angles at once, is goosebump inducing. Despite their power, their titles, their positions and heritage, they are just people who believe they are trying to make a difference for their country, even if they are ultimately wrong (as was the case for Wallace). Crisis, the resulting film, remains a monumental piece of filmmaking that captures a pivotal moment within the civil rights movement and polishes it to a pristine shine, reflecting that progress can be made, both socially and cinematically.

While we all know the tragic fate of John F. Kennedy and his brother Bobby, the poetic requiem that is Faces of November, Drew’s final film on the Kennedy family, rounds out this set. Documenting the faces of those that attended J.F.K.’s funeral and snippets of the funeral itself, the film paints a portrait of America mourning the loss of not only its youngest president, but hope for a brighter tomorrow. Maybe more than ever, we need to rekindle that hope and inventiveness that burned so brightly during the Kennedy years. Hopefully the Kennedy films of Robert Drew & Associates help to keep that fire burning.

What can one say about a perfect release? The films themselves, drenched in thick blacks and heavy grain, look absolutely outstanding. The audio for each, while never perfect to begin with, probably sounds better than it ever has since it was mixed during their original runs. And for only having a single disc for all four films, its kind of amazing that so many crucial and enlightening extras were stuffed in as well. This is a must have release, hands down.

Alternate cut of Primary
Frantically edited by filmmaker Richard Leacock in an effort to find an outlet to show te film, this is drastically reduced cut. It certainly makes for an interesting contrast to the original edit and gives a bit of incite into Leacock’s take on the film. 26 min

Audio commentary on Primary
Recorded back in 1961, this conversation with film critic Gideon Bachmann, filmmakers Richard Leacock, Robert Drew and D. A. Pennebaker may be the absolute highlight of the disc. Completely amped up on their newly discovered form and its philosophical, cinematic possibilities, everyone involved in this debate is lively, fully engaged and wildly passionate about documentary filmmaking. And just in the wake of Primary‘s release, they don’t even really have the words or terms to fully describe what they are doing. It was a brave new world…

Robert Drew in His Own Words
Produced by Criterion, this new documentary features archival interview footage of Drew telling his own history of working in film and his want to change the form of documentary production. Plus, it begins with the doc legend filming himself flipping pancakes. Must watch. 34 min

New conversation between Pennebaker and Jill Drew, Robert Drew’s daughter-in-law and the general manager of Drew Associates
Pennebaker lovingly discusses how he got involved with Drew, Time-Life and his time filming the Kennedys. As always, the man is a joy to listen to. 26 min

Outtakes from Crisis
Historian Andrew Cohen, author of Two Days in June, discusses at length what was and was not included in Crisis, before we are privy to a selection of footage that was ultimately left on the cutting room floor. 46 min

New conversation about Crisis
Within, former U.S. attorney general Eric Holder and Sharon Malone, Holder’s wife and the sister of Vivian Malone, one of the students featured in Crisis, discuss the film and her sister’s place in history. 26 min

Robert Drew & Associates at The Museum of Tolerance
Constructed from footage from a 1998 event at the Museum of Tolerance in Los Angeles, featuring Drew, Pennebaker, Leacock, and filmmaker Albert Maysles, this new doc sees the fathers of direct cinema reflecting on what they achieved. 27 min

Booklet
Features film credits and an excellent essay by documentary film curator and writer (and, full disclosure, my boss over at Stranger Than Fiction and DOC NYC) Thom Powers.

Undeniable landmarks in documentary form, Primary and Crisis will be forever preserved as part of the National Film Registry, not only for their historical value as cinematic accounts of the presidency, but for their lasting influence on the course of cinema itself. Drew’s direct cinema movement has influenced generations of documentary filmmakers and will continue to do so for as long as these films can be seen. And thanks to the wonderful folks at the Criterion Collection, they just became a whole lot easier to find.