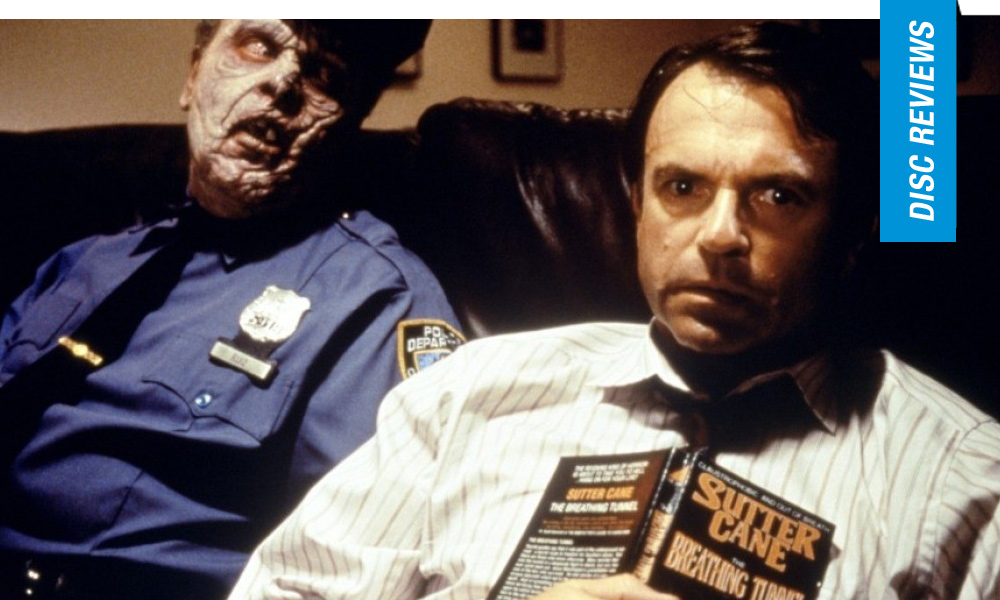 In the continued resurrection of several forgotten and neglected titles by John Carpenter (which included recent Blu-ray released of Village of the Damned, Memoirs of an Invisible Man and Someone’s Watching Me!), Scream Factory thankfully made time for one of the genre master’s most underrated items, 1994’s In the Mouth of Madness. An homage to both H.P. Lovecraft and Stephen King (Carpenter famously directed the 1983 adaptation of his novel Christine), Sam Neill, fresh off his Jurassic Park bump, stars as a no-nonsense insurance investigator tasked with tracking down an infamous horror novelist named Sutter Cane (Jurgen Prochnow), whose disappearance on the eve his latest novel’s publication might just be an elaborate publicity stunt. However, Neill’s John Trent soon finds the boundary between fiction and reality is thinner than he had realized.

There’s a lot to appreciate in this unpredictable script from Michael De Luca, which does an excellent job driving home how conceptions of religion and reality are just ideas established by the cultural majority—if enough people believe it, so it shall be true. Meanwhile, fans of Lovecraft will note all De Luca’s Easter eggs planted throughout the narrative, including the titular homage to At the Mountains of Madness.

Neill, in one of his least humorless straight man roles, allows for enough convincing seriousness to ground the narrative as it becomes more and more outlandish. A cameo from Charlton Heston as a horror publishing guru and a creepy supporting turn from Julie Carmen (still best known for her supporting role in John Cassavetes’ 1980 classic Gloria), who is eerily reminiscent of Jessica Harper, adds to the film’s considerable menace during the initial set-up.

Although this heavy-metal inspired Carpenter score is one of the director’s least successful (and most dated), In the Mouth of Madness features some notable special effects (courtesy of Gregory Nicotero) and maintains some of its unsettling atmosphere thanks to its subversive, cerebral ideas (and it’s the film debut of Hayden Christensen).

Scream Factory presents In the Mouth of Madness as a new 4K scan of the original film elements, presented in 2.35:1 with 5.1 DTS-HD Master Audio. Picture and sound quality are well-attenuated, and the disc includes a commentary track from Carpenter and producer Sandy King Carpenter. Several bonus features are also included.

The Whisperer of the Dark:
This nine-minute interview finds Julie Carmen relating her experiences making In the Mouth of Madness (including how Carpenter wanted her to emulate Rosalind Russell from His Girl Friday).

Greg Nicotero’s Things in the Basement:
Special effects expert Greg Nicotero discusses the make-up and effects of In the Mouth of Madness in this sixteen-minute segment.

Home Movies from Hobb’s End:
Twelve-minutes worth of behind-the-scenes make-up and special effects sequences are included in this segment.

The Making of In the Mouth of Madness:
This five-minute vintage featurette focuses on the making of the film.

Zvyagintsev gets Banished to a Quiet Place in the Country with “The Banishment” | Blu-ray
Criterion Collection: The Ballad of Gregorio Cortez | Blu-ray Review
Advertisement
Advertisement