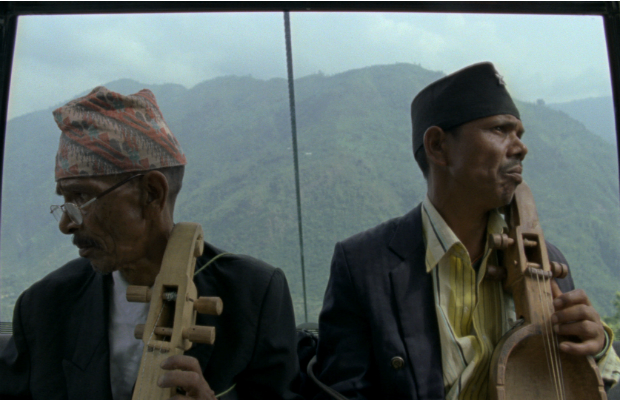 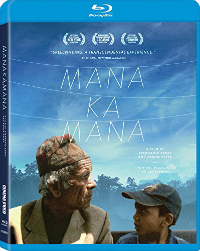 Birthed by the brilliant minds at Harvard’s increasingly influential Sensory Ethnography Lab, Stephanie Spray and Pacho Velez’s Manakamana takes in the sights and sounds of the mountainous Nepalese wildness from the bird’s eye view of a sky-bound Austrian engineered cable car that transports Hindu pilgrims and worldly tourists alike to a temple atop the rugged ridge, yet the film does not explain this simple fact. Rather, taking visual cues from the structuralist filmmakers of the 60s and 70s, their 16mm camera sits statically across from various lift passengers on their way to and from the mountain top temple, documenting their 10 minute trip in whole 400 foot reels of film as the lush landscape passes them by like some kind of nostalgic scrolling rear projection effect. In theory, the film sounds like a heady slog of documentary slow cinema, but the resulting two hour feature is a charming bit of ethnographic observation that challenges us to consider the implications of technology on traditional cultures and religious rituals.

Though it’s not explicitly made clear by Spray or Velez, the cable cars so central to the film did not exist until 1998, thus many of the subjects previously had made the days long trek by foot. Like most contextualizing facts gleaned from within, we find this out through merely observing – the continuously morphing non-verbals, the slow unfurling of group communication, or the swell and subdual of the atmospheric soundscape meticulously recorded. In this particular case, casual conversation between an anxious husband and wife recall the last time they hiked up the overgrown mountain path by foot, years before. It’s a simple statement, but it’s a revelatory moment encapsulated brilliantly in nostalgia for the devotion required for such a pilgrimage and appreciation for the ease with which the current journey is supplied by human technological advances.

Other such comparisons are plentifully sprinkled throughout the film. One, from the ambiguous opening shot, of a weary old man sitting silently next to what one can assume is his grandson, a youthful child sporting a Tom & Jerry baseball cap, appearing to be a combination of sick, confused and fear stricken. The grandfather figure, one later might assume, has probably made the long, hard trip to worship the mountaintop goddess Bhagwati maybe a handful of times over the course of his lifetime, while the child will never have the same intense experience of physically sacrificing his body to the elements in order to pay tribute to the goddess at the summit. Instead, he will remember the lackadaisical ride and the short lived spectacle of the scrolling view. The thought is both tragic and hopeful and only begins to sneak into our consciousness as we watch them sit side by side, generations apart.

The epochal divide continues to crop up in scenes of young multi-ethnic tourists and a trio of rockers more interested in taking selfies than actually taking in the sights. In these strangely entertaining scenes, technology seems to deter the introspective ritualistic religious experience rather than aiding its ease. In more subtle terms, the funniest ride sees a traditional Hindu golden-aged mother and daughter combo pathetically attempt to devour ice cream bars before they melt for what they claim to be the first time in their lives, a simple suggestion of how the increasingly capitalistic culture around the temple is moving swiftly into the 21st century. Several of the passengers ask the goddess aloud – for strength or for power – but what these two women really need is a napkin. And that’s ok.

Manakamana documents this cultural shift in the minor subtleties of facial expressions, the blatant differences between tradition and emerging technologies, and the recurring commentary of universal interests – ears popping and the beauty of the forestry below – through the austere act of simply watching an event play out in actuality and for that it is to be fervently commended.

With each new release from The Cinema Guild, the maturing distro continues to prove itself among the best and brightest in the business. This film, primed with poignant extras and presented with a near pristine HD transfer, serves as further proof. Shot in Super 16, the film has a pleasant, minute grain and earthy color temperature, only a couple times showing specks of dust or debris on screen for a split second. Presented with a DTS-HD 5.1 track in tow, the low key film does boast quite a bit of aural depth in the natural atmospherics outside the cable cars, the rare conversation that crops up, the single instance of performed music and the often startling intensity of the crash of cable as it passed by the steel support structures. The disc itself comes in a standard Blu-ray case.

Additional Car Rides
A trio of cable car trips that didn’t make the feature, one featuring a man who knows quite a lot about the cable cars themselves, one featuring a pair of blind men, and another featuring two holy men – each giving additional experiences to contemplate. 34 min

Audio Commentary with directors Stephanie Spray and Pacho Velez
Furnishing all the contextual information they withheld from their feature, the filmmakers divulge on the topics of technical preparation, subject selection, how the lifts work, what the temple is used for and much more. Though the film certainly works alone, this is a great complimentary piece.

Booklet
This slim little supplement features a stirring essay on the film by Dennis Lim, as well as a transposed in-depth interview with the filmmakers by their producers, Lucien Castaing-Taylor and Véréna Paravel.

Certainly a hard film to sell to your average filmgoer, Manakamana is surprisingly watchable thanks to its languorous pacing that naturally encourages cultural contemplation. No matter the viewer, observations will be made, questions will simmer and internal speculations will eventually surface. In this case, seeing is, indeed, believing (or, at least making the cinematic pilgrimage). It’s certainly worth the journey.