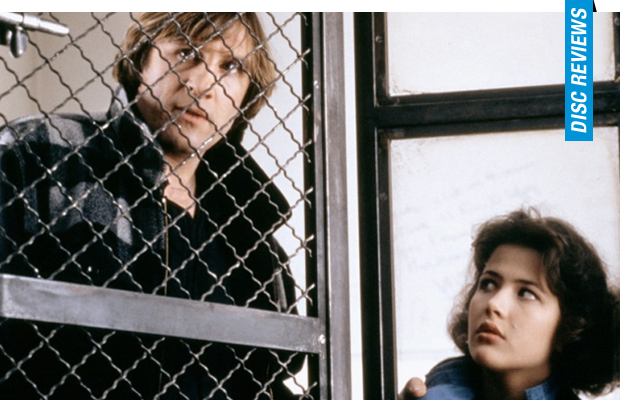 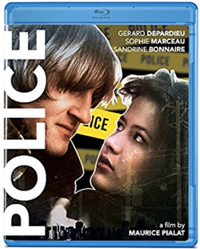 In the fall of 2016, Cohen Media Group staged a phenomenal retrospective of five masterpieces by Maurice Pialat, including his 1987 Palme d’Or winning Under the Sun of Satan. Largely known as a short documentary filmmaker through the 1950s and 60s, his ten features which spanned from 1968 to 1995 would influence several generations of filmmakers thanks to Pialat’s distinctive style and his refusal to align himself with any contemporary movements or schools. Nearly all his films have been treated to restorations or Blu-ray transfers, with labels like Criterion (L’Enfance Nue; A Nos Amours) and Kino Lorber (We Won’t Grow Old Together) responsible for the titles left out of the aforementioned retrospective. And now, Olive Films releases one of Pialat’s two most neglected features (the other being the 1995 swan song Le Garcu) with 1985’s brooding drama Police, scripted by Catherine Breillat (alongside Sylvie Danton and Jacques Fieschi) and starring Pialat regular Gerard Depardieu and a nubile Sophie Marceau as a manipulative femme fatale.

Moody and unpredictable detective Louis Vincent Mangin (Depardieu) isn’t a man revered for his soft touch. Known for his violent, questionable interrogation tactics, he manages to skirt by with an irascible attitude which often provides good enough results in his line of work. After raiding the home of and arresting a suspected drug dealer, Rene (Frank Karaoui), who they have damning voice recordings of, Mangin’s men also arrests his live-in girlfriend Noria (Sophie Marceau). Drawn to her beauty, Mangin finds himself sympathizing with the potentially dangerous woman and secures her release so he can then pursue a relationship. But Rene’s family is involved in a sordid matter involving heroin and two-hundred thousand dollars cash which suddenly goes missing.

In retrospect, perhaps it’s Pialat’s title (his most ambiguous) which partially assisted in the film’s surprising obscurity, which Maiwenn recycled for her 2011 French melodrama Polisse (the German language title for this Pialat feature, Der Bulle Von Paris, or The Bullet of Paris, is a bit more evocative). Racism and misogyny are not only expected aspects of the law enforcement routine, but freely cultivated, as exemplified by the treatment of Pascale Rocard’s female rookie, who her colleagues allow to be abused by men on the street while she’s forced to play flirtatious games with Depardieu’s Mangin, a man who can’t understand why she would relent to such a charade if she didn’t have intentions on following through. Sandrine Bonnaire, who headlined Pialat’s earlier, explosive familial shriek of pain A Nos Amours, shows up in several sequences as a call girl/informant, but is more of a background detail (this was, however, the same year she would star in Agnes Varda’s Vagabond).

The real star of the film is an enjoyably complex Depardieu, a temperamental police investigator who wears his desires on his sleeve. Immediately smitten with Marceau’s Noria, the otherwise jaded detective’s vulnerability to her wiles is evident in their first sequences where he longingly moons over her, giving her sandwiches and cigarettes while she’s holed up at the police station as his buddies interrogate her Muslim boyfriend.

The usual taint surrounding such interracial mixing is a bit more complex in an item like Police, and Breillat’s dialogue takes pains to address how the juxtaposition between Noria’s lovers isn’t substantial. When Mangin questions how Noria can stand to be with aligned with a group of men who notoriously demean women, she asserts there’s not much difference between either of them. Depardieu deftly bridges the film’s switch in tone from a procedural to a noir-tinged melodrama, the comical Mangin drawn inextricably into a dangerous plot where he’s forced to act as Noria’s shield only to be routinely abandoned.

Pialat’s signature docu-style (here framed by famed Italian DP Luciano Tovoli, who worked with Antonioni, Ferreri, Argento, and most often with Barbet Schroeder) sometimes occludes the film’s earlier jocular tone courtesy of Depardieu, already well known for utilizing his swarthy comportment in his characterizations. Innocuous moments often escalate quickly into threatening verbal or physical altercations, such as Noria’s face-off with her boyfriend’s family as they try to protect not only their brethren but ongoing criminal operations.

Depardieu took home the Best Actor prize at Venice where Police competed under a jury led by Polish director Krzysztof Zanussi, and subsequently scored a Cesar nod. One of many outstanding moments in his prolific filmography, Pialat makes his tenuous, foolhardy romance with Marceau not only believable but even somehow touching, lost as his character is as a man who thinks nothing of pawing at his attractive female colleagues and willfully breaking protocol in order to further his chances with a beautiful, captive woman.

As the mob family’s smug lawyer, Richard Aconina is a compelling supporting character portraying a man who uneasily straddles both sides of the law. Threatened with revealing the whereabouts of Noria, a final interaction with Mangin reveals the lawyer has also had an illicit affair with the mysterious woman, someone who has managed to keep her real identity a secret. At the center of this masculine crisis, it’s interesting to see Marceau in one of her first significant roles, with Police released the same year as L’amour Braque, her first of several collaborations with husband Andrzej Zulawski, whom she had married the previous year.

As is required by her character, we learn little of her except she has managed to turn every precarious scenario to her advantage, nabbing a big bag of dough and protection from the law just long enough to escape unscathed. Her character recalls the street-wise Barbara Stanwyck of 1933’s Baby Face, a woman egged on by a Nietzsche touting cobbler (Alphonse Ethier) who imploringly advises, “You must use men! Not let them use you. You must be a master! Not a slave.” And Pialat, perhaps also taking a note from the specter of Nietzsche, shares a contemporary glimpse of the same kind of world in Police, “nothing more or less of exploitation.”

Olive Films presents Police in 1.66:1, with picture and sound quality serviceable in the otherwise barebones transfer sans any extra features.

Police is a compelling, distinct portrait of a familiar story from an idiosyncratic auteur.