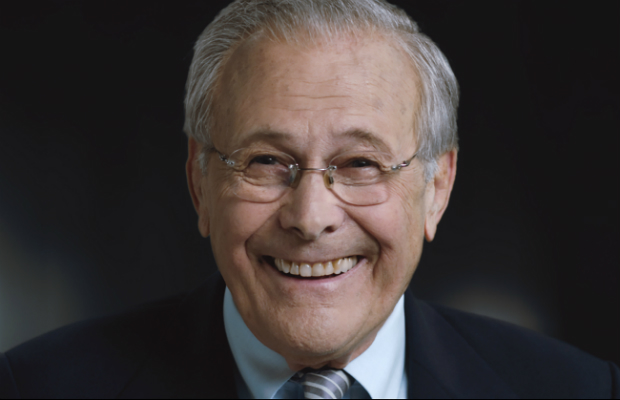 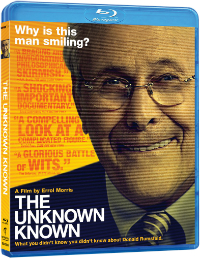 The poster of Errol Morris’s newest interrotron bonanza, The Unknown Known, features former secretary of defense Donald Rumsfeld sporting his signature squinty eyed, cheese eating grin with an ironic question floating just left of his forehead: Why is this man smiling? Why indeed. Using the same straight shooting interrogation style employed for his bouts with Robert S. McNamara in The Fog of War, Morris fails to really answer this fairly simple seeming question, but that’s the point. Where Morris successfully coaxed the facts of controversial political lineage from McNamara, with Rumsfeld, there seems only to be the eloquent facade of deflections and fortune cookie phrases we are all too familiar with from his daily white house press conferences as the public face of the war on terror post-9/11. Less politically enlightening than its cinematic predecessor, The Unknown Known succeeds instead in highlighting with a blacked out layer of comedy just how tenaciously arrogant Rumsfeld and his administrative cohorts truly were while they sent American troops to fight forces on the other side of the world who in the end did not actually possess weapons of mass destruction.

Love him or hate him, staring straight into the void of Morris’s unadorn frame, Rumsfeld becomes a sort of comedic character who skates by on a sort of pathetic veneer and sheer personality, almost Chaplin-esque in his inability to take responsibility for his actions due to a lack of cognizance of his own actions, yet the Tramp at least knew when to shut the fuck up. It’s really quite astounding to witness. Morris’s invitation for inquisition had to have seemed like a challenge he was sure he could talk his way out of, seeing it as an opportunity to clarifying his side of the political story while recasting, as he puts in the film, the facts on such events as the Guantanamo debacle and American perspective on Saddam’s involvement with Al Qaeda. And he does, cool and calculated, to the detriment of his credibility thanks to Morris’s viciously contradicting cuts that place Rumsfeld under the bloodied blade of the guillotine by his own hands.

Over the 103 minutes in which Morris unpacks the former secretary of defense’s inconsistent baggage, composer and repeat collaborator Danny Elfman finds himself the secondary star of the film, with a characteristically lush, but wholly fresh take that feels more a fleshed out composition by Morris’s famed early associate Philip Glass. The vibrant soundtrack acts as a perfect counter-balance to Rumsfeld’s baffling and often hysterical responses and they also allow for visual variation away from that infuriating grin, most notably of, well, notes, or snowflakes as they became known in the whitehouse. These are, of course, the thousands of voice memos that Rumsfeld dictated and sent out to his staff over his many years of service and which Morris has employed here as both visual flair as overlaid text and as primary ammunition throughout his days long interview.

Fully locked and loaded with hours with of questions, Morris fires at Rumsfeld who still manages to deflect and redirect with his non-sensical catch phrases of half-wit wisdom, his negligence fully on display with a sickeningly stoic kind of ease. With The Unknown Known, the director proves that sometimes we don’t need to see the blood or hear the bearing of souls to know the truth.

Morris’s highly composed style benefits immensely from the HD format. Outlined in an inky black, Rumsfeld’s ghostly grey face looks as life-like as anyone ever has in cinema. The detail is outstanding. Occasionally, Morris does break the golden documentary rule of maintaining the original aspect ratio of archival material, but the rest of the film, drenched in crisp, stylish overlays of definitions and headlines, looks quite extraordinary. As far as audio goes, the HD-DTS 5.1 track pumps out Danny Elfman’s wonderfully lush and abnormally memorable score through the mains and around the edges of the satellite speakers with ease and extreme clarity. Rumsfeld and Morris’s conversation laying on top is crystal clear. The disc itself is packed in a standard Blu-ray case.

Audio Commentary with director Errol Morris
For all his highly engaged intellect on his films, here Morris seems content to sit back and watch the film along with us for much of the track. When he does chime in, he mostly regurgitates answers from many given interview questions. Occasional though, he does give key thematic entryways into the mind of Mr. Rumsfeld, as well as gives his own opinions about many political actions in the film.

A Conversation with Errol Morris
Morris recounts how the film came to be, his invitation to Rumsfeld’s office and how he feels the film is his greatest depiction of self-deception yet. 8 min

Four-part Op-Ed “The Certainty of Donald Rumsfeld” by Errol Morris
This lengthy little on-screen eBook style essay, though much appreciated for its contextualization of the film, should have been included as a small booklet inclusion rather than something one must read awkwardly from the screen.

Early in the film, Rumsfeld accuses Morris of being an obsessive person, fascinated by the concept of obsession itself. Rumsfeld isn’t wrong in his accusation. Throughout Morris’s oeuvre, he obsesses about many of the same themes; mainly self-deception, and with The Unknown Known he certainly has found a magnificent specimen of that bizarre phenomenon. Despite the presentation and conversation about the evidence that Rumsfeld’s political decisions may have done irreversible harm to US policy and the American people at large, the former Secretary of Defense completely fails to see the folly of his ways. The film may not be Morris’s strongest film, but it’s certainly a worthy edition to the pantheon of investigative oddities he’s been building over the course of the last three decades.