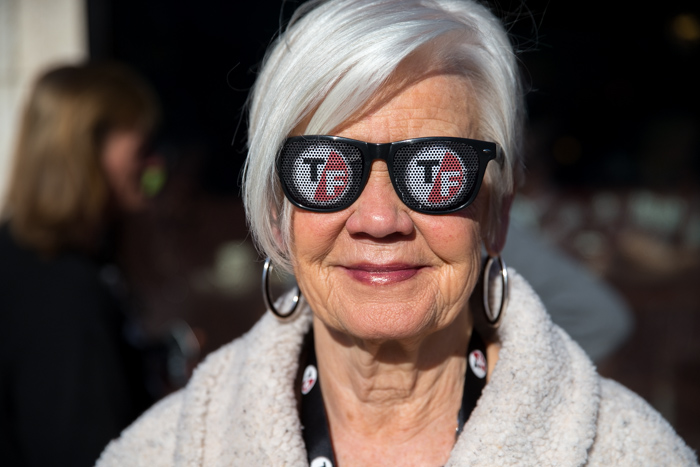 For being just a brief 4 days, True/False is a densely packed festival, and I mean that in the true celebratory sense, full of not just film screenings, but parades and parties, street bound buskers, live game shows, filmmaking workshops and what-have-you, and it’s all condensed down into a vibrant, but relatively small college town. Everything is within a 10 minute walk. And where else might you walk two blocks and in the process subsequently encounter the likes of Joshua Oppenheimer, Alex Gibney, Nick Broomfield and the Ross Brothers? Paul Sturtz and David Wilson, the founders of True/False have created something truly special here in Columbia, MO – a glorious celebration of non-fiction filmmaking and the fascinating fault line that separates the unreal from the untruthful.

Interestingly, Alex Gibney’s latest feature peddles only truth, but deals with the murky myths of a science fiction pseudo-religion. Based on Lawrence Wright’s exposé of Scientology, Gibney’s Going Clear: Scientology and the Prison of Belief  is both a searing caveat to believers and was my personal wake-up call come Sunday morning. More in line with his culturally revealing works such as Mea Maxima Culpa: Silence in the House of God or Taxi to the Darkside than his recent run of rather lightweight, meandering music docs like Finding Fela! or Mr. Dynamite: The Rise of James Brown, the film dissects Scientology like a poorly written term paper, pointing out in red ink all the historical inaccuracies, falsifications and unethical research methods with vengeful glee. By enlisting former believers to admit the shady goings on within the organization, from the tippy top of the chain of command down through the entry levels of ‘clarity’, Gibney essentially reveals Scientology to be a surreal pyramid scheme cult founded on the insane-o scribblings of sci-fi writer L. Ron Hubbard. The Church of Scientology elite are made to look like a bunch of straight fools, money hungry elitist assholes with a flair for the entertainingly, if somewhat scary, dramatic.

Next on my Sunday schedule was Morgan Knibbe‘s IDFA debuted Those Who Feel the Fire Burning. Expanded from his award winning short Shipwreck, which recreated the tragic events of October 3rd, 2013 in which a boat carrying 500 Eritrean refugees sunk off the coast of the Italian island of Lampedusa and over 360 people drowned, the film is a ghostly tour of migrant life in Greece. Beginning with this fictionalized scene in a style that recalls the bracing aquatic violence of Lucien Castaing-Taylor and Verena Paravel’s Leviathan, Knibbe’s film settles into a roving observational style reminiscent of Gaspar Noé’s out-of-body experience Enter the Void, taking in the sights and sounds of the outcast community with a wayfaring curiosity that prompts the camera into poetic movement with the shifting environments at hand. Both a haunting ghost story and a stark depiction of refugees stuck in a European purgatory with no end in sight, Those Who Feel the Fire Burning feels at once cinematically fresh and culturally disheartening.

Maybe not as disheartening as it is disconcerting, Lyric R. Cabral and David Felix Sutcliffe’s (T)ERROR unveils the ethical callousness of FBI counterterrorism sting operations by settling in with an active informant attempting to make contact and essentially entrap his assigned person of interest into committing acts of treason. Morally complex characters mix with morally complex filmmaking, coalescing into something cinematically new and politically incisive as the camera watches others surveilling others with each harboring their own interests, needs and fears. Essentially a character study that encompasses the dangers of widespread, unchecked surveillance in the United States, Cabral and Sutcliffe’s creation is a sobering call for essential legislative reform that do in fact guarantee our freedom of religion, speech, privacy and due process when the shadows of surveillance decides to show its unwieldy head.

After a day full of great but emotionally draining, generally dispiriting films, I was relieved to walk into the Missouri Theater full of happy filmgoers who’d been downing free kegs of beer prior to my last-minute arrival for the closing night screening of Jerry Rothwell’s archival tribute to the early days of Greenpeace, How to Change the World. To be frank, I was expecting the film to be a rather bland celebration of the good old days, with its treasure trove of early footage and retrospective interview based overview of events past, but I could not have been more wrong. From the mountains of rich, grainy film Rothwell was given access to, he’s woven a delectably textured, often thrilling narrative of the lo-fi Greenpeace beginnings. Constructed around the journal entries of founder Bob Hunter, the film sees him and his ragtag group of hippy activists venturing into the wilderness to save the whales from bloodthirsty Russians (to monumental affect) and seals from small town fur hunters (less so), until the eventual group disillusionment, inevitable collapse and reinventive globalization of the organization. I couldn’t have asked for a more entertaining, enlightening, and ultimately hopeful piece of non-fiction fun to cap off my first True/False experience.

With its laid back, filmmaker friendly vibe, free of the industry hub-bub that can smother the fun from many mainstream film festivals, True/False had me at “Here is your pass,” wait free, followed by a stream of smiling faces and Q queens loving life, guiding my way through documentary heaven. Columbia, come next year, call me home!

2015 True/False Film Fest: Finders of a Century of Heck? – Day 2
Or, My Treasure: Ronit Elkabetz Serves as President for 2015 Critics’ Week
Advertisement
Advertisement