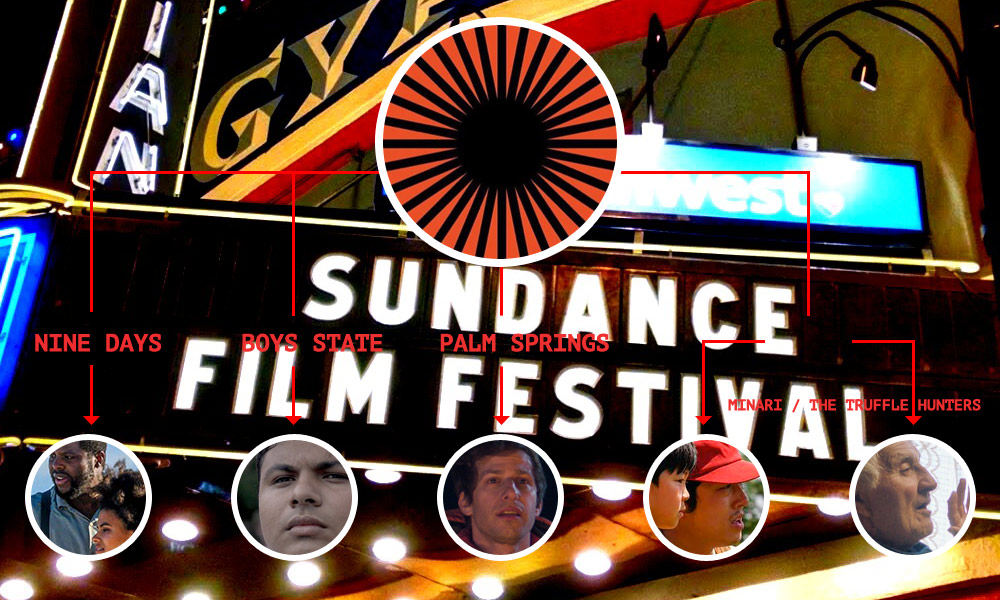 This year’s Sundance slate was one of the most diverse ever: nearly half of the 128 feature films were directed by women; 34% of the total were directed by a person of color. Beyond diversity, Sundance 2020 has turned out to be a bellwether for another great year of cinema. Some critics bemoaned a quiet first weekend; others found reason to nitpick particular films. But my answer to naysayers is: see more movies … because a deep dive will tell you, this year’s crop delivers.

There was so much buzz this year about so many movies—instead of one or two frontrunners, a la 2017’s Get Out and Call Me By Your Name — that it was almost impossible to leave fully satisfied. Bear in mind that out of the 30+ films that I did view, my top ten are below.

#10. The Night House – David Bruckner
David Bruckner gives us The Night House: the scariest Sundance movie since Hereditary. Mourning the unexpected loss of her husband in the lakehouse he built for her, Beth (a wonderfully acerbic Rebecca Hall) struggles with nightmares … which suddenly become real. The house becomes a central character; creepiness ratchets up. Building on classic horror tropes, Bruckner subverts expectations, then rewards us with smart scares—sound design used in devious ways, jump shocks that actually make us jump. And Hall really sells it, conveying emotional truth even in the film’s most outrageous moments. In fact, she’s almost too good: when she trades interacting with other humans for bouts with evil spirits, it’s a letdown – and as a result, the third act fizzles (not unlike the 2014 psycho-horror It Follows). But that’s OK, the joys of Bruckner’s first two-thirds are enough (also like It Follows). This is one of those films that linger long after the night ends. Horror fans, see this in a theater … and prepare to be haunted.

#9. Dick Johnson Is Dead – Kirsten Johnson
With Dick Johnson Is Dead, Kirsten Johnson (Cameraperson) adds an essential entry to the taboo conversation about death. Echoing Agnes Varda, this poignant, often comedic meditation follows Johnson’s own past-his-prime father, the titular Dick, through a series of pre-death rituals. Some are quiet reunions with loved ones; others are loud, hypothetical fantasies where Dick is flattened by a falling air conditioner, then dances in heaven with celebrities. Somehow, despite her morbid humor, Johnson exudes grace and reverence while chronicling the inevitable. Mixing astute observation with a daughter’s sensitivity, she gives her dad a great send-off—and you’re probably gonna cry. My favorite moment is a best friend’s farewell speech—which he barely manages without choking up—followed by a “hunting horn” serenade that couldn’t be more out of place. Johnson’s message? Try to relax and have fun in the midst of not knowing what’s next.

#8. The Last Shift – Andrew Cohn
Andrew Cohn’s The Last Shift is a heart-wrenching ode to the working class, missed connections and guilt. Richard Jenkins is expectedly perfect as longtime fast-food worker Stanley, the quintessential exasperated everyman (even his character’s laugh sounds desperate). Promising newcomer Shane Paul McGhie plays Jevon, an ex-con father and new employee whom Stanley has to train. Both leads have rigid worldviews—but despite some common ground, their relationship is never going to go Green Book. Instead, Cohn has the guts to examine economic and racial bias with realistic messiness. Rather than seeking answers, he explores interior lives and reveals painful doubts. The world is flawed—and The Last Shift is a breath of wintry air: real-world melancholy meets classic indie charm, minus mawkish contrivance.

#7. Never Rarely Sometimes Always – Eliza Hittman
Writer/director Eliza Hittman is known for her sensitive dramas. Her Sundance breakthrough Beach Rats (2017) tackled masculinity; this year, she confronts abortion in her powerful Never Rarely Sometimes Always. Autumn (newcomer Sidney Flanigan) is 17 and pregnant; telling her parents isn’t an option. She and her friend Skylar (Talia Ryder) travel from Philly to New York to get an abortion. Along the way, they encounter myriad terrors, usually in the form of toxic men—everyday fixtures in the lives of teenage girls. Never Rarely Sometimes Always is politically relevant, sure, but never maudlin or predictable. Even more than Beach Rats, Hittman’s latest resembles a hand-painted tableau: intentional in every sense. Once again, her actors feel like real people, believable characters who happen to fall within range of the camera. Their mix of naiveté and resilience make this detailed, personal rendering of unwanted pregnancy a tale for all.

#6. Farewell Amor – Ekwa Msangi
In Farewell Amor, first-time director Ekwa Msangi presents a story of cross-cultural heartbreak and healing. Unlike agenda-laden immigrant stories, this film makes complete strangers feel like family. Seventeen years after Walter (Ntare Guma Mbaho Mwine) was forced to leave his family in Angola, his wife and daughter Esther (Zainab Jah) and Sylvia (Jayme Lawson) rejoin him in Brooklyn. Their reunion is uneasy: things have changed. Like Moonlight, Msangi’s film unfolds in three chapters; but here, each segment comes from a separate character’s perspective. This structural technique—slapped onto some films just for the hell of it (cough, Black Bear, Luxor)—is truly inspired in Farewell Amor. It ensures that no side of the story goes unheard; it feels inventive without losing its thread. The result is a deeply human story, convincing from first frame to last. By the end of a week in their dining room, you know too much and care even more—and though the film’s climactic dance-off is neither Napoleon Dynamite nor 8-Mile, we still end up cheering.

#5. The Truffle Hunters – Michael Dweck and Gregory Kershaw
Co-directed by Michael Dweck and Gregory Kershaw, The Truffle Hunters is a surprisingly lush documentary about a gastronomic white whale: Italy’s coveted Alba white truffle. Composed in equal parts legato and staccato, this film is for food and dog-lovers alike. Juxtaposing a callous industry and indifferent consumers with the bucolic grit and earthy tenderness of aging woodsmen, The Truffle Hunters is both splendid and heartbreaking. The hunters are a dying breed; their dogs are beyond beloved. One character refuses to hunt—despite generous offers from young truffle buyers—because competition over hunting grounds led to the poisoning of his dog. Enriched by a visual mix of gorgeous food porn and Italian countryside—plus a truly beautiful score—this mouth-watering doc leaves you utterly charmed. It also contains the best shot of the festival. Spoiler: the filmmakers attach a Go-Pro to a truffle-dog’s head.

#4. Minari – Lee Isaac Chung
Minari wowed Sundance audiences and took home the top prize for good reason: this A24 drama rocks. Writer/director Lee Isaac Chung’s autobiographical tale follows a Korean family who tries to create a life in rural Arkansas. Each member of the family gets an emotional through-line, but we inhabit seven-year-old David’s perspective more than any other. David, who suffers from a heart murmur, builds a relationship with a grandmother he’s never met; she’s the only family member who doesn’t underestimate him. Meanwhile, he witnesses the unraveling of his parents’ marriage: the impotent patriarch (wonderful Steven Yeun) and concerned wife Monica (cutting Han Ye-ri). By avoiding over-the-top sentimentality—and over-emphasis on racial or cultural challenges—Minari is delicately crafted, subtly political and quietly powerful … like Little Miss Sunshine by way of Yasujiro Ozu.

#3. Palm Springs – Max Barbakow
Fearlessly irreverent, unapologetically funny, Palm Springs is a perfect romcom for the attention deficit generation. Andy Siara and Max Barbakow’s script is funniest without spoilers, so take my word for it: this writer/director team—along with actors Andy Samberg, Cristin Milioti and J.K. Simmons—hits all the right beats. Even during prerequisite scenes about the meaning of love, the film is packed with irreverent humor … and surprisingly, message. For sad bois afraid of commitment, it delivers convincingly poignant inducements without veering into sentimentality. In sum, Palm Springs plays like a feature-length episode of Rick and Morty, taking a classic sci-fi premise and giving it a fresh twist—with a healthy dose of mean-spirited humor and I Love You, Man heart.

#2. Boys State – Amanda McBaine and Jesse Moss
Amanda McBaine and Jesse Moss’s Boys State is an outstanding vérité doc, an incredibly gripping drama, a thrilling character study and an of-the-moment cultural microcosm. The setting is political summer camp in Texas, where 1,000 seventeen year-olds are given the opportunity to build a representative government from scratch. These teens are fascinating—both in their ability to take themselves seriously, and their tendency to revert into juvenile goofiness. Frankly—and sadly, not that shockingly—these teens aren’t a far cry from the career politicians we see on TV. But Boys State goes deeper: it tells more human truths than the news; it feels more cutthroat than Game of Thrones. It’s also one of two films in the festival in which memes can win an election (the other is fellow doc competitor Feels Good Man, which very nearly made this list). By exploring our partisan, win-at-all-costs mentality, our tendency to pander to voters and the chaos of group-think, this film gives us a neotribalistic Lord of the Flies. It also tackles an urgent question: will we split apart or reconcile?

#1. Nine Days – Edson Oda
Edson Oda’s debut feature Nine Days is, quite simply, miraculous. Will (Winston Duke in a god-tier performance) is a metaphysical gatekeeper who must test five anthropomorphic souls for the ultimate privilege: being born as a human. Think Willy Wonka with “gift of life” as the golden ticket. Zazie Beetz (as Emma, one of Will’s candidates) also delivers some of her best work to date. Nine Days is empathy incarnate: universal, personal, beautiful. This is the earnest, hopeful movie our collective soul needs, especially now; underlying its drama is the message that sensitivity is a strength. In the spirit of Hirokazu Kore-eda, Terrence Malick, Michel Gondry and Charlie Kaufman, Nine Days is a wholly original, brilliant exploration of empathy and the pain that comes with. The performances, the score (violin chords that will conjure tears) and the sheer inventiveness of this film stand head-and-shoulders above everything else at Sundance 2020.