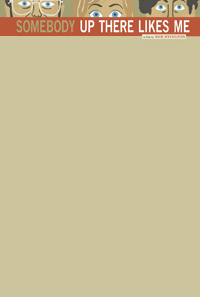 To look at it one way, marriage is impossible. And hilarious. You kind of know the person, imagine you might come to know the person, and then you decide to share everything with them, forever. Similarly, friendship, real, true friendship, is a fallacy; something that looks good on paper but in fact doesn’t actually exist (in a comedy). In Bob Byington’s Somebody Up There Likes Me, Max, Sal, Lyla and Clarissa mix and match, hooking up with each other, occasionally getting entangled but more often looking around with a bemused smirk. In exploring the absurdity of relationships, the miracle that they function at all, Byington has drawn a wry but telling picture of what it’s like to try to make it work with another human being.

Max (a dough eyed, sad sack Keith Poulson) is trying to do the least possible amount to stay afloat. He works at an upscale restaurant with Sal (Nick Offerman, replete with his character Ron Swanson’s requisite dry wit) and Lyla (Jess Weixler, a blank- faced blonde). After Max catches his wife cheating, he slowly begins to fall for Lyla, or more so, fall into a situation with her, without any effort whatsoever. They never seem to really know each other, nor do they seem to care. When they decide to marry, Max explains to Sal that he “re-upped.”

One of Byington’s conceits here is to jump in five-year intervals with animations acting as bridges in time. It’s a pleasing mechanism because everyone ages except for the main characters; by the end of the film, Max’s son looks substantially older than he does. Despite all this time passing, no one seems to learn anything. Byington seems to be saying that relationships do not evolve; rather, they repeat themselves endlessly, until someone finally agrees to die.

Everyone is certainly doing their best to be at their worst. At Max and Lyla’s wedding, Sal approaches a young woman, “You seem to be unaccompanied. Can I offer you a glass of champagne?” he says. “I’m sixteen,” she answers. In parenthood, they’re not much better. When Max brings his son Lyle to his baseball game, he can’t help but watch the older kids because they’re better and it’s more entertaining. By the time Max succumbs and starts sleeping with the nanny Clarissa (Stephanie Hunt), you’re impressed he’s managed to wait as long as he did.

There is no shortage of disappointments for these people. Later on in their marriage, Max and Lyla go into counseling with a therapist (a hilarious Megan Mullaly) who is completely disinterested and out to lunch; at one point while Max is droning on about his problems, he catches her humming to herself and has to politely ask her to stop. In this world, you cannot even pay someone to listen to you or take anything seriously.

Living out the American Dream, Max and Lyla fall into a significant amount of money after her father dies. After the divorce, complete with a “Just Divorced” car, Max and Sal go into business together opening a restaurant with the two foods that everyone in the world can agree about: ice cream and pizza. First a food stand, then the world. In Somebody Up There Likes Me, life passes them by, someone is buried. As five years become ten, and twenty become forty, it’s clear that these people didn’t, couldn’t, learn; that they were destined to continue making the same mistakes. At least they were in it together.

Jesse Klein (MFA in Film and Video Production from The University of Texas at Austin) is a Montreal-born filmmaker and writer. His first feature film, Shadowboxing, (RVCQ '10, Lone Star Film Festival '10) . As well as contributing to IONCINEMA, he is the senior contributor to This Recording and writes for ION Magazine and Hammer to Nail. Top Films From Contemporary Film Auteurs: Almodóvar (All About My Mother), Coen Bros. (Fargo), Dardenne Bros. (Rosetta), Haneke (The White Ribbon), Hsiao-Hsien (Flowers of Shanghai), Kar-wai (In The Mood For Love), Kiarostami (Close-Up), Lynch (Blue Velvet), Tarantino (Jackie Brown), Van Sant (To Die For), von Trier (Breaking The Waves)