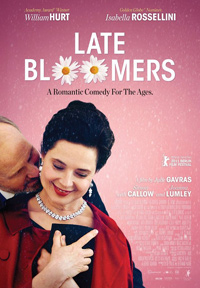 Julie Gavras (daughter of political filmmaker Costa) returns after her well received 2006 debut, Blame It On Fidel with a low-key, unassuming effort, Late Bloomers. But for a film that seemingly indicates later life epiphanies and growth, this slow going narrative offers nothing new, and rather than sustaining your attention span, it may create early shrivels.

We meet a high functioning couple, Adam (William Hurt) and Mary (Isabella Rossellini), as Adam is about to receive a prestigious award for his contributions to architecture. The award seems to herald the onslaught of senior citizen status for the couple, as Adam interprets the award as the death knell of a once successful career. After the ceremony, Mary suffers a jarring episode of memory lapse, which makes her realize that she’s suddenly in her 60s.

While she jumps into some senior lifestyle changes (appliances for geriatric help in the home, synchronized swimming lessons), Adam experiences a regression in the opposite direction. As he embarks on a new project designing a senior living complex, Adam recruits a crew of young architects and toys with the possibility of an affair with a young female protégé. Unable to face Mary’s overzealous embrace of senior citizenship, he begins to sleep at his office. Mary gets involved with The Grey Panthers, a senior citizen group, with the help of one of her best friends, Charlotte (Joanna Lumley) and her still lively mother, Nora (Doreen Mantle). Meanwhile, their three children become alarmed and try to bring their parents back together.

If this all sounds trite and tired it’s because Late Bloomers happens to play like a contrived version of something else. There’s nothing new here that we haven’t seen before. Apparently, Gavras was inspired to make this film after experiences with her own father, changing the occupation of her lead character from director to architect. There are some thematics and motifs of interest here, but presented to us with such glaring nonchalance, it’s hard to muster any reaction to the proceedings. As Charlotte, Joanna Lumley tells the architect that people of a certain age are simply forgotten. “How are women in their 60’s to 80’s supposed to act?” That is an excellent question, and one well worth being explored in cinematic form. However, Late Bloomers is not that film.

While Gavras has managed to get three very good performers together for her film, the only reason to tune in is for the still luminous Rossellini. The wonderful Ms. Lumley, though looking good, only seems to be on hand to remind her friend that to be left alone at their age is a lonely haul. Other supporting characters, such as Adam and Mary’s children, are even more crudely hewn, their concern about their parents’ looming divorce alarming them only because they might get saddled with administering care for them. And to remind us all that this is a light, frothy comedy is an insistent, hokey score that pops up obtrusively and repeatedly. Late Bloomers isn’t a bad film, but it squanders the talent of some first class talent.